What Americans Love to Watch from Across the Pond

It’s been a lot longer than four score and seven years ago since the United States declared its independence from Britain, but there are some things from across the pond that we just can’t quit. JK Rowling and the magical world of Harry Potter, royal weddings, and the charm of afternoon tea are just a few of the British exports we’re perpetually fangirling over. And British TV. So much British TV. With the rising popularity of Netflix and our ability to stream shows like Downton Abbey and Sherlock, the team at CableTV decided to research popular British TV shows in the U.S. to see what might be trending on “the telly” in your state. 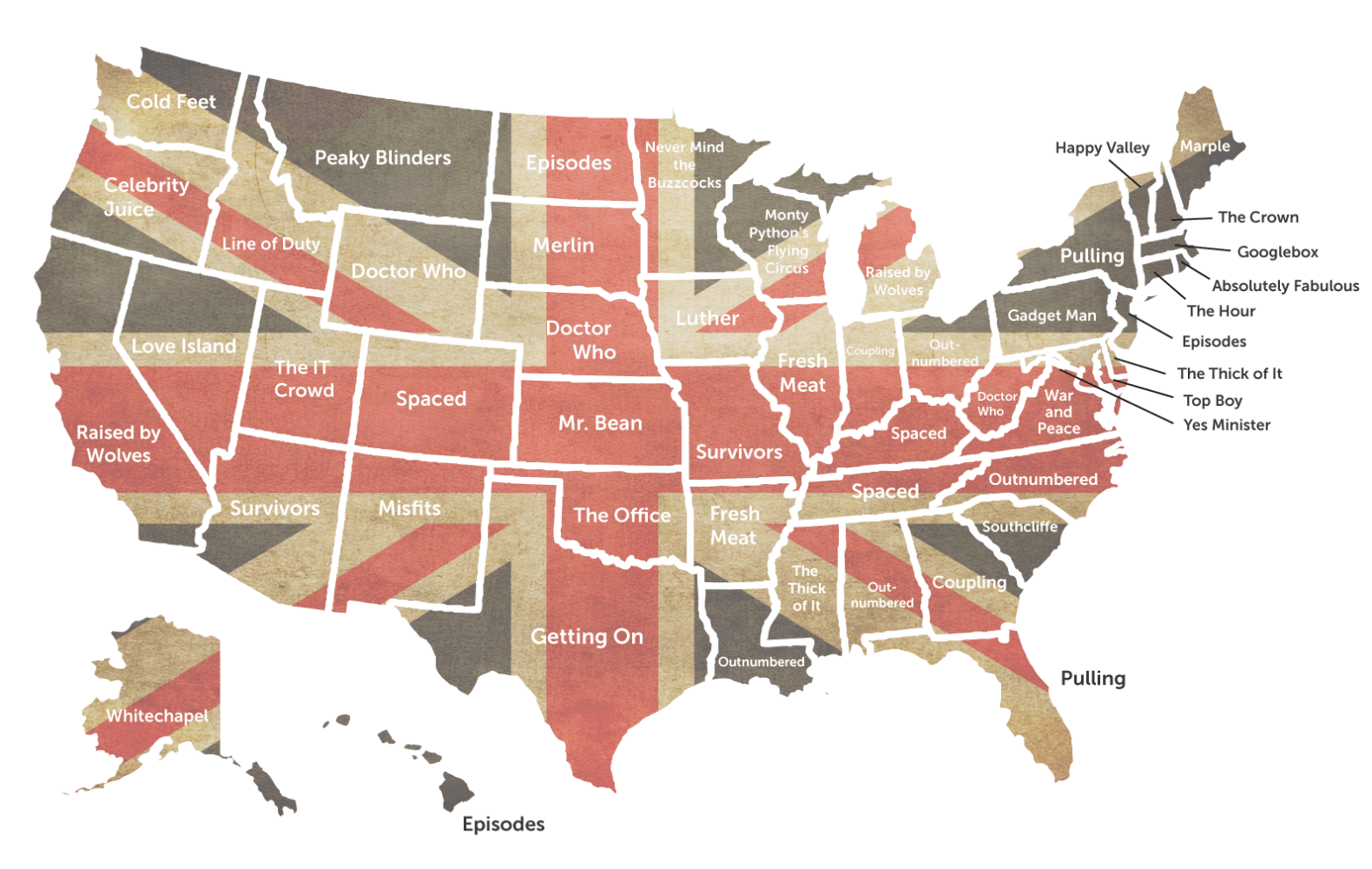 We admit it. We expected to see a Downton Abbey America, too. But because we looked at British TV past and present, we got lots more variety in our data. While some of the high-profile shows are still featured on our map, you’ll see some lesser-known favorites that American viewers have been hooked on for years. What is the most popular British TV show in America according to our research? All other TV from across the pond is outnumbered by Outnumbered, an award-winning sitcom about the realities of modern parenthood.

We arrived at each state’s favorite show by identifying popular British TV past and present, and then we used Google Trends to determine which ones were favorites in each state. Check out the complete results below.

What trends did we spot in our British TV data? Come join us for a spot of speculation.The More Things Change, the More They Stay Exactly the SameOur British TV map holds up the patterns of viewing we’ve noticed in other types of entertainment data over the past year. The Western and Southern portions of the States prefer comedies and the fluffier content of sitcoms, while in the Northern and Eastern regions, viewers snuggle up to dramas and strong female leads.We Are What We WatchWe’ve said it before, and we’ll say it again. Some states are watching shows that reinforce regional stereotypes. Here are just a few that’ll make you chuckle:

Regional TrendsAcross parts of the United States, we noticed some specific trends. While British comedies are generally more popular than other types of content, there were a few sub-genres that seemed to be favorites in certain pockets of the country.

And Baby Makes ThreeThere seems to be a bit of correlation between high birthrates and states that prefer comedies about couples or families, proving parents like to laugh at their own trials and tribulations as much as the next TV viewer. Some examples:

Like Guns? You probably also prefer your British TV with a side of firearms. States with higher rates of gun ownership per capita pull out all the stops with shows that feature plenty of sharp shooting.

Are you a fan of what your state serves up for British TV? Share with your friends to discuss and find new shows from across the pond to stream.