“Bones” Returns to Mondays: Celebrate With 5 of the Best Episodes of Season 9 So Far 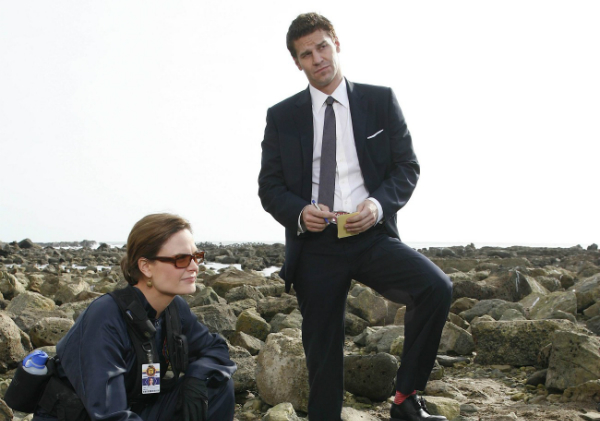 “Bones” is moving back to Monday nights when new episodes resume March 10, and what better way to celebrate that (and the pickup for season 10) than with a list of the best episodes so far in season 9?

“The Secrets in the Proposal”

Despite the painful place Booth and Brennan were in in their relationship, due to Pelant’s threat at the end of last season, and despite a case that didn’t hold my attention because of everything else going on, this was a good start for the season. It introduced two new characters I immediately wanted to see more of – Aldo (Mather Zickel) and Danny (Freddie Prinze Jr.) – and Pelant’s presence was still very much around in a powerful, albeit invisible, way.

“The Sense in the Sacrifice”

Considering the damage Pelant had done in his reign of terror – and he made it very personal – it had to be something big that ended it, and it was. This episode showed what the team can accomplish working together (they really are that group of people who can kill you and leave no evidence behind), kept you on the edge of you seat, answered that pesky question about Flynn, teased the introduction of a new serial killer, and ended the only way it could: with a proposal.

“The Woman in White”

It was an event nine seasons in the making, and Booth and Brennan’s wedding ended up being very “Bones.” Some familiar faces returned (though unfortunately, others did not), there was still a case (but it lacked a sense of urgency so it wasn’t the focus), and the right guy – Aldo – married them. Their vows were what they should have been, both recalling significant moments from their past. For Booth, it was his “Listen, I just have to get all my ducks in a row” (“I can be a duck,” Brennan chimed in), and for Brennan, it was finally revealing what she had written to Booth when she had been buried alive.

“Big in the Philippines”

One of the season’s most emotional hours, both case-wise and team-wise, it saw a country singer murdered just as he became a hit in the Philippines and Wendell face an uncertain future when a broken arm led to Brennan realizing he had bone cancer, and the odds were not in his favor. The episode showed Brennan and Booth both finding it hard to deal with the news and his chances and Brennan unable to remain focused on work, while Wendell wrestled with deciding whether to stay and fight or go see the world. Yes, Wendell decided to stay and fight, but that could still have been one of the last times we see him.

“The Heiress in the Hill”

Another very emotional episode, this one focused on something I had been hoping the show would explore: Hodgins’ family. Hodgins found out he had a brother with schizoaffective disorder only because it was time to pay Jeffrey’s institution. Hodgins was broke, but he refused to let Jeffrey be moved out of his home to a state facility and instead of accepting money from Booth and Brennan, he took out a loan. Hodgins didn’t have an easy time bonding with his brother, but they were on the right path by the end of the hour, thanks to their shared love for Jules Verne. This was one of TJ Thyne’s best episodes to date, plus it explored Hodgins’ family and showed the consequences of Hodgins losing his money because of Pelant.

Which “Bones” episodes do you think are the best of the season so far?