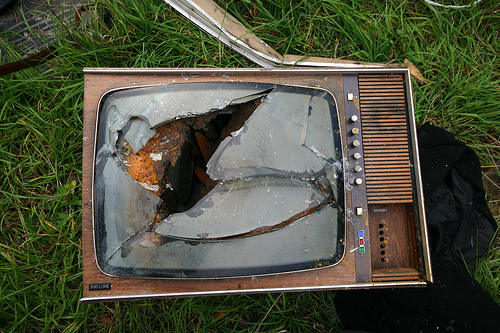 Before you read ahead, ask yourself silently if you think TV really matters anymore. Through the 1940s and up until the early 90s television played an incredibly important role in daily life. Families could sit together and watch celebrities and entertaining skits play out on The Ed Sullivan Show. The only way to get sports scores or highlights quickly was through TV. Breaking news – including the moon landing, the assassination of JFK, and a changing cultural landscape throughout the 60s and 70s – was broadcast directly into homes across the United States. No matter how you look at it, television was pretty important for much of the past 70 years. But now we have the internet and wireless networks and handheld computers that can make calls and order takeout. We don’t need a TV to discover that a terrorist leader has been assassinated, or that someone in New Jersey is getting drunk and starting fights. Now more and more people are ditching their TV sets in exchange for more time on the internet. Rather than watching a show reminiscent of I Love Lucy we have Trending Tweets and Facebook photo albums. We’re entering an era where TV – as both a platform for media and the content that is produced specifically for it – must be questioned. While TV has undeniably had an important place in history, the future remains extremely uncertain. Or does it? What I find myself asking every time I pass the TV in the living room isn’t whether a TV set has a place in my home, it’s whether it matters anymore. You likely ask the same question from time-to-time if you have a TV in your home. One way we can look at whether TV matters is the impact it still has on over 96% of America. Back in 2007 one third of US households didn’t have high-speed internet. Today, not even 80% of the nation, I would say, has internet access (yet). So yes, TV still matters because it can reach an entire nation. Cell phones and the internet aren’t reaching the entire population yet, and that means they just aren’t as important or meaningful or reliable as television still has been. Sure, the internet is undoubtedly growing – and fast – but it still doesn’t reach nearly the same amount of people as television. And TV is catching up with the space the internet and cell phones created years ago too. While websites such as Twitter and Facebook allow us to see news in real time, televised news is getting to the point where it’s practically real time as well. Technology like Boxee and even the slow-to-adapt Apple TV are making TV more interactive and customizable, like the internet has been. So, does TV matter? Looking at the facts, and the statistics on how many people still rely on TV for news and entertainment, I’d like to think so. But what do you think? Does TV matter anymore? Photo source

Where Do Our Old TVs Go? (Graphic)
Why Do Channels Stick Their Logo On the Screen?