Programmed for comfort, humans tend to gravitate towards the familiar. When life gets overwhelming, some viewers turn to reality TV. Whether it’s to experience things vicariously or to find comfort in a family more dysfunctional than our own, we find ourselves tuning in like veritable peeping Toms.

The team at CableTV wondered if there were insights to be gleaned regarding the appeal of reality TV by analyzing Google Trends. We found the top show for each state, then compared the favorite show to state statistics. The results are in—and we’ve got a breakdown that packs plenty of surprises. 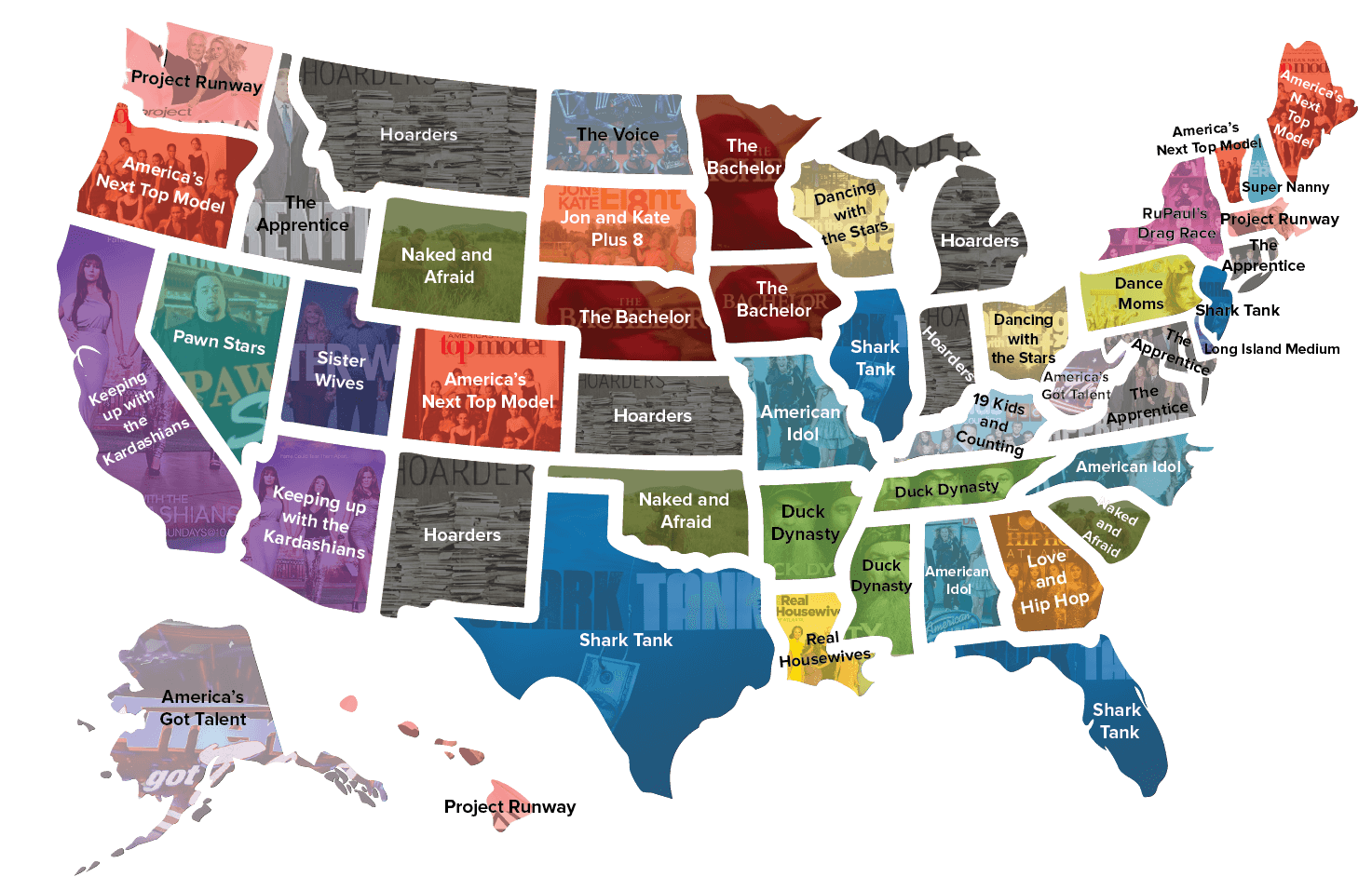 Generally, viewers love to indulge in reality shows that reflect their own regional interests. Many of the popular reality TV shows in each state reinforced regional stereotypes and clichés. People in the South seem to enjoy watching the redneck branded, gun-toting Robertson family from Duck Dynasty. States infamous for polygamy embraced Sister Wives as their own, while those in the harsher New England climates preferred to test their skills with Survivor. Below, in each state breakdown, you’ll find the top three reality TV shows and a fun fact about correlations between viewers and the TV they watch. Sink into the couch and take a tour from sea to shining sea as we reveal the guilty pleasures each state entertains.

While Arizona may have the most national monuments of any state, apparently they’d rather build a monument to the enduring appeal of a wealthier lifestyle.

State Stats: As the national leader in copper production, Arizona has a bit of a taste for bling. The top of the Capitol building of Arizona has a copper roof equivalent to 4.8 million pennies.

Arkansas is one of the least educated and most obese states in the nation, but they aren’t afraid to view a little nudity.

While Alabama falls in the top 3 for frequent church attendance, it appears they worship an idol of a different sort.

Alaska leads the nation both in positive ratings of well-being and in crime per capita. Balancing such contradictions takes talent.

State Stats: #1 on both Gallup well-being index and crime rate.

California is in the top 3 nationally for income and median house price, so they know a thing or two about how it feels to keep up with the Kardashians.

For a state that’s in the top 5 for earning bachelor’s degrees, Colorado sure seem distracted by bachelors of a different variety.

Since Connecticut boasts the nation’s second-highest household income, it’s no surprise that they’re focused on making money with The Apprentice.

Delaware falls in the bottom 5 on Gallup’s community index, indicating they perceive their state as next door to swimming with the fishes.

While D.C. may be #1 in education with the most BA’s and advanced degrees, residents of this state are more interested in apprenticing with “The Donald”.

Less kids, older viewers, and miles of coastline makes Florida the perfect breeding ground for an affinity with Shark Tank.

Georgia lingers near the bottom of the financial health index nationally, which may explain why they’re in love with the idea of music stardom.

Ranking near the top of the Gallup well-being index, Hawaii doesn’t need to strut their stuff on the runway to be admired.

Since Idaho is in the top 3 most Republican states in the nation, it doesn’t take big brother to guess at what fuels their attraction to the presumptive GOP nominee.

Lingering near the bottom of the barrel on Gallup’s community index gives Illinois plenty of incentive to rise to the top with entrepreneurial savvy and make their community a better place.

Indiana falls in the top 5 for most kids per household, making their interest in Hoarders about more than just a cluttered, chaotic playroom.

An interest in The Bachelor may be what’s at the heart of Iowa’s place in the top 5 most married residents.

Kansas’s state motto translates to “To the Stars with Difficulty.” The difficulty may in fact be an obsession with stuff.

State Stats: A famous Kansas resident gives new meaning to reaching for the stars. Amelia Earhart, first woman granted a pilot’s license by the National Aeronautics Associate and first woman to fly solo across the Atlantic Ocean was from Atchison, Kansas.

Kentucky may be near the bottom for both education, income and Gallup’s well-being index, but they’ve learned to count on entertainment with 19 Kids and Counting.

State Stats: Bottom 5 in graduates of both high school & college. Bottom five in income & rate of marriage. Bottom 5 across all Gallup well-being categories of health.

Residents of Louisiana may be some of the least likely to get married in the nation, but they get to enjoy the reality of being a housewife.

Maine is still hale and hearty enough to walk the runway, despite having the highest median age in the nation.

While this state may be in the top 5 for education and income, they also carry one of the highest ratios of debt. Hopefully Maryland can earn an advanced degree in financial savvy with The Apprentice.

As one of the most heavily Democratic states in the nation, Massachusetts still finds plenty of time to gawk at the GOP presidential candidate.

With one of the lowest median house prices in the nation, Michigan residents have decided to fill their homes with Hoarders rather than mountains of stuff.

State Stats: Because it touches four of the five Great Lakes, Michigan has the nation’s longest freshwater shoreline.

Minnesota ranks second in high school graduates, all of them apparently eager to find their perfect match and settle down with The Bachelor.

Near the top 5 in church attendance, Mississippi still finds time to worship the mating call of Duck Dynasty.

If these ratings are any indication, “The Show Me” state, Missouri, doesn’t need to demonstrate that they idolize Trump.

State Stats: There are lots of reasons to idolize Missourians, including the fact that the first successful parachute jump from a moving plane was made above the Jefferson Barracks military post, near St. Louis, on March 1, 1912.

With some of the lowest rates of obesity, a slim and healthy Montana isn’t afraid to get naked.

Nebraska ranks in the top 5 on the social well-being index, indicating they rub elbows with romance often to keep up with the competition.

New Hampshire, who is number one in non-mortgage debt, may need some supervision for their wallets.

As a state in the bottom five on the community well-being index, New Jersey gives ‘swimming with the fishes’ new meaning.

In one of the top 5 most democratic states, New York proves liberals don’t consider Ru Paul a drag.

The “tar heel” state, North Carolina is certainly keeping their step light by idolizing Dancing with the Stars.

State Stat: Americans can find plenty to idolize about North Caroline, including the fact that many people believe it was the first state to declare independence from England with the Mecklenburg Declaration of 1775.

Featuring the youngest viewers in the nation, North Dakota’s reality TV habits give teenagers a voice.

Ohio pulls in at the bottom of the rankings for overall well-being, but that doesn’t stop them from leaping for the stars every week.

Near the bottom of the physical well-being index, it’s no wonder residents of Oklahoma are afraid to get naked.

Oregon, the “beaver” state, is eager when it comes to determining who should walk the runway.

State Stats: This state is no stranger to watching people strut their stuff. Portland is home to the annual World Naked Bike Ride, in which over 10,000 naked cyclists take part.

Leading the competition in debt, Pennsylvania calls no contest to the appeal of dancing.

While Rhode Island is one of the states with the fewest Republicans, they can’t look away from Trump’s attempt to become the next top GOP candidate.

State Stats: Bottom 5 in percentage republicans and residents who are married.

Ranking in the top 5 for social well-being, South Carolina isn’t afraid to get naked and idolize The Apprentice.

South Dakota is one of five states that leads the nation in well-being. Residents count on Kate to keep them entertained with healthy fun.

While the state has a high crime rate, Tennesseans seem to think it’s a shame not to heed the call of Duck Dynasty.

With the second youngest viewers in the nation, Texas isn’t afraid to jump into entrepreneurialism and start swimming against the current.

Utah has the most kids per capita in the nation and doesn’t lose any time keeping up with Sister Wives.

State Stats: Most kids per family. Top 5 in church attendance and percentage of Republicans.

This state is a model of good behavior with the lowest crime rate and church attendance in the nation. Vermont’s success should always be in fashion.

Ranking in the top 5 for debt nationally means Virginia still has a lot to learn from The Apprentice.

Washington’s state motto, “hope for the future,” seems to be firmly fixed on the fortunes of high fashion.

At the bottom in most categories like education, income, and well-being, West Virginia looks to reality TV to prove they’ve still got talent.

You don’t have to badger Wisconsin into taking a break from being “America’s Dairy land” to dance with the stars.

State Stat: Think Wisconsin is cheesy? Yep. And residents are proud of it! About 90 percent of the milk from Wisconsin cows is used to make cheese.

With plenty of experience as a wilderness oasis, Wyoming isn’t afraid to get naked and tough it out.

Data Highlights from Our Reality TV Google Trends Analysis
Do I Have to Bundle Cable and Internet Service?