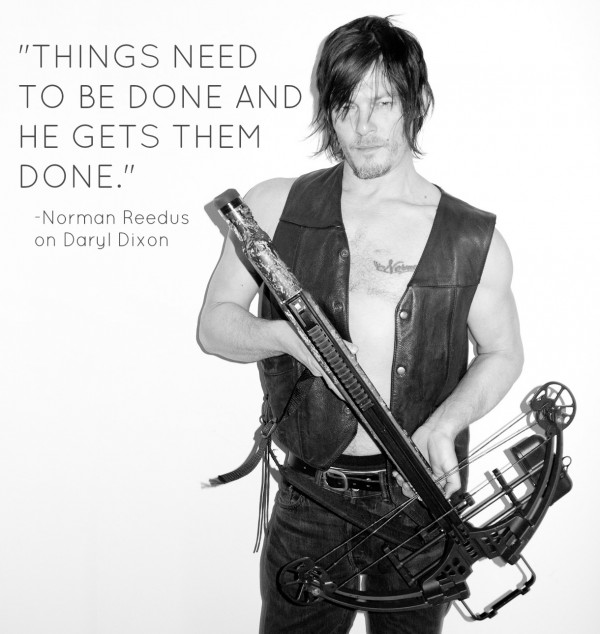 In an exclusive interview, Norman Reedus, star of AMC’s The Walking Dead, spoke about how his character Daryl Dixon has evolved from Season 1 to now and what fan’s could expect for season four. Q: From Season 1 to now, Daryl has changed so much. I wanted to ask you about the evolution of your character? Reedus: Oh yeah, he has changed a lot. I think all of the characters are completely different from season one. He was sort of destined to become his brother and I think he grew up sort of ashamed to admit to who he was. I never wanted him to say racist things or take drugs like his brother, or anything like that. I wanted to portray him as someone who grew up embarrassed of all of that. His brother was out of the picture and then in season two, [Daryl] sort of came out of his shell and I think the first season for sure, I kind of set everything out in the top corner, top left corner of my head you know. I looked up at you when I spoke and then turned away from you. I tried to show how shame full he was, like don’t look at me, don’t look at me. Now, through being with this group…he sort of found this new sense of self worth. Everything he says now, his shoulders are square to you and he look at you directly in the eyes when he speaks. I think he is slowly becoming proud of who he is now. There is a lot of history with him and I don’t think he viewed himself as a good person. Now I think he sort of – I don’t think he is completely reformed – but he is definitely becoming somebody that he is more proud of and slowly becoming the man he wouldn’t be unless this happened. Q: It’s so interesting because in the beginning the characters that were softer (helping others out) have become more cynical, whereas Daryl who was a loner is more of a softhearted person. It’s like this event made him opposite. Reedus: It’s true. I think that was always the plan. You know, I don’t even know if that was always the plan to be honest. It sort of has just evolved naturally. He definitely even in the beginning, like that whole storyline with Randall, with Dale’s character saying ‘who have we become’ ‘what will we do with this kid,’ he was in a tool shed throughout the course of two episodes. Everyone was saying what have we become, what should we do, should we kill him, should we set him free… eventually got one of us killed. You know Daryl just walked in there, beat the crap out of him and hid his bloody hands behind his back and said this is what’s up… he didn’t walk back with his hands in the air and said look at what I did, he just quietly came back and just say this is what’s happening, this is what this kids about. He starts this season in a bit of a more leadership role. He is not Rick and he doesn’t want to be Rick. Things need to be done and he gets them done. He is not an ego driven guy. He means what he says and he is an honest person. He wears his heart on his sleeve. Q: What’s the deal with Daryl and Carol? They haven’t gotten together, but there is some serious sexual tension. Reedus: Those two characters are very similar. There are things about them that are very similar and I have always said damaged people sort of gravitate towards damaged people. So there is a bond there for sure. As far as the sexual tension, there are so many awkward moments when a guy meets a girl and especially when they are not the of guys and it’s not their intention to just get laid, I want that to be a natural progression just like the character has been a natural progression. Once it happens it’s done and I don’t want to just throw somebody up against a tree in the moonlight. It’s not what that’s character about and I think it’s boring…If it’s going to happen I want to earn it. Q: What can we expect for season four? Reedus: We still have all of the action that we have always had, but the first season was a hyperventilating breath, like an introduction to this world. The second season was sort of an explanation, like you had to explain things to create storylines to have a series run. The third season was like this war. This is all of those combined in this season with the best writing that we have ever had on the show. It’s super, super good. I am so excited for people to watch this season. Q: Is Daryl going to be dealing with the aftermath of what happened with his brother? Reedus: There is some of that. There is a bunch of new stuff. One of the good things about this show is that we never sit still. Listen to the full interview with Norman Reedus below. Tune in to the season four premiere of The Walking Dead on October 13 on AMC. Can’t wait for the premiere. Experience The Walking Dead interactive motion comic, Zombiefied.
Post by CableTV.com.
Answer: “Pookie” Find Monica on Google+