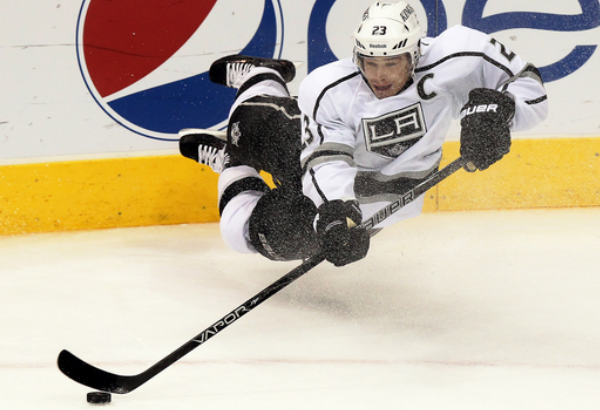 A recent Slate article by Joel Warner outlines a study that found high consistency in scoring patterns among basketball, football, and hockey. I’m not that surprised by the findings. Football, basketball, and hockey (along with several other sports) are derived from the same basic principle — get the object in the goal. But that narrow view ignores what makes sports great. Sports are about people. These games are about physics and psychology. Most importantly, sports are about drama. The numbers don’t account for these elements. By looking at what the numbers miss, we see why sports excite us. The physics of sports establishes a pattern, which sets the stage for the drama to unfold. Scoring is Predictable The research on scoring patterns was done by Aaron Clauset, a computer science professor at the University of Colorado. In Warner’s article, Clauset admits he’s “never really been a sports person.” That didn’t stop him from analyzing a decade’s worth of scoring plays in college football, the NFL, NBA, and NHL. Clauset’s analysis, submitted to the “Journal of Quantitative Analysis in Sports,” found similar scoring patterns across all four sports. According to the study, scoring tends to be slow at the beginning of a scoring period, fairly steady throughout most of it, and increases sharply just before it ends. Which team scores points was found to be a matter of random chance, but that chance was effected by each team’s skill level. The study found football and hockey teams with a lead tend to score more. Clauset explains the tendency as a function of team skill, not momentum or strategy. For basketball, the team that was trailing tended to score more. Clauset believes this to be due to teams resting their best players while they’re ahead, thus effecting the skill level of the players on the court. Strategy is Overrated Clauset used his model to make remarkably accurate predictions about game outcomes based on which team was ahead by any given amount at any time. The numbers suggest strategy has little or no effect on the outcomes of games. “This common pattern implies that scoring events are largely memoryless, i.e., the timing of events earlier in the game have little or no impact on the timing of future events. Memorylessness contrasts with the dynamics of strategic games like chess or Go, in which events early in a game constrain and drive later events,” Clauset states in his paper. The Deeper Workings of Sports If strategy has little to no effect on scoring patterns and random chance accounts for most of the scoring, then why do fans find sports so compelling? Does this study shatter the appeal of the games? “From a fan perspective, that’s the most exciting kind of system,” Clauset said, referring to the random model observed. The system may be exciting to study, but sports need more than a statistical model to engage fans. If it didn’t, we would be more inclined to watch game simulations based on statistical systems than actual live games. Warner asked Russell Carlton of Baseball Prospectus about the lack of strategic influence found in Clauset’s study. “I don’t see that as a specific threat. I would just write an article about the theoretical underpinnings of what is going on there,” Carlton said. Studying the deeper interworking of the statistics may be interesting, but still misses the point. Embracing the Exceptional When studies like Clauset’s identify big patterns in sports that seem to simplify the games, they only enhance what makes sports great, not by identifying a system of chance or by inviting deeper study, but by showing us how rarely someone or something bucks the trend. You can’t have the unexpected without the expected or the extraordinary without the ordinary. That’s what creates the drama and the unexpected moments that make sports great. “There were very, very few ‘outliers’ in the usual statistical sense,” Clauset said in an email. Clauset’s raw data are unavailable due to a licensing agreement, so just how many “very, very few” actually is remains a mystery. However, the fewer there are, the more special they become. Clauset’s paper reported 185,292 scoring events across college football, professional football and hockey over a 10 year period and 1,080,285 scoring events in professional basketball over a nine year period. That’s about 138,561 scoring plays per year. Even if only .04 percent of those scoring plays fall somewhere outside of the norm, that’s about 55 surprises per year. Preseason football to postseason basketball lasts about 11 months, or about 45 weeks. Meaning, even with very few outliers, we might see one or two unexpected, extraordinary plays per week. Plus, who knows how many amazing physical feats we witness on a weekly basis that don’t result in points. That’s why we watch. We watch every week hoping to see athletes with enough skill, power, body control, and will to push the limits of physics and defy the odds. Thanks to statistical analysis done by people like Clauset, and inquisitive reporting by people like Warner, we can appreciate the amazing rarity of the extraordinary. Find John on Google+

Calcio Storico: Why The Worlds Most Violent Sport Will Never Come To America
Cheap Cable TV