‘Supernatural’: Why Did Crowley Inject Himself With Blood? 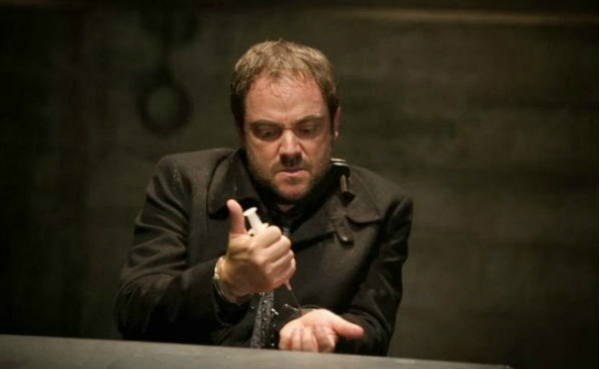 The world in Supernatural has changed in season 9. Angels have fallen, Zeke is possessing Sam to heal him (or so he says), Castiel is human, and no one’s quite sure what’s going on with Crowley, but he’s not just chained up in the bunker’s dungeon to deliver the best lines of each episode. Sam and Dean have been turning to him for his knowledge at times, but it was in “Heaven Can’t Wait” that another question was raised about the King of Hell when Sam saw him injecting himself with a syringe of blood. Why?

In last season’s finale, “Sacrifice,” Sam and Dean captured Crowley to complete the third trial to close the gates of hell by curing him. In order to do so, Sam had to inject him with his blood, and while he stopped before the trial was completed, viewers and Sam saw a change in Crowley in that church. How could you forget that HBO monologue that ended with “I deserve to be loved! I just want to be loved” and his question to Sam, “Where do I start to even look for forgiveness?” (which was helpfully included in the “Then” of “Heaven Can’t Wait”)? One of the big questions going into this season was what not finishing the trial would mean for Crowley, and I think episode 906 was the starting point for just that.

Beginning in the second episode of season 9, Crowley has been locked up in the dungeon in the Men of Letters bunker. Crowley has still been making deals—a phone call and a chance to stretch his legs, in exchange for information—but after seeing him with that syringe, I do question his motives in “Heaven Can’t Wait.”

To make that call to Abaddon (did anyone else love seeing the King of Hell put on hold?), he needed either Sam or Kevin’s blood, and he wanted Kevin’s for “variety.” Did he really even care about making that call? Plus, how did he get his hands on that syringe?

So why could Crowley have been injecting himself with what I assume is Kevin’s blood? Could he really want to be human and that incomplete trial worked better than they thought? Is he just trying to find a way to get out of that Devil’s trap and out of the dungeon so he can reclaim his place as King of Hell? I’m not so sure about that one because of the expression on Crowley’s face during that scene. Could Crowley be addicted to it? Supernatural did explore Sam’s addiction to demon blood, and honestly, I hope they won’t be going down a similar path with Crowley.

Was there a reason Crowley wanted Kevin’s blood? Could there be something about prophet blood or did he really just have enough of Sam’s?

I also question if his goal wasn’t that call but the blood. Did he really want to talk to Abaddon or did he use it as an excuse to get his hands on a syringe of blood?

However, that does lead into another question. Where did he get that syringe? Chained up like he is, it would not have been easy for him to get it with Sam and Kevin in the room, and I would think when Sam packed up the case to leave the dungeon, he would have made sure he had everything. So here’s a theory. Since it seems highly unlikely Kevin would bring him the blood—unless Crowley offered him something in exchange, like perhaps information about his mother—perhaps it was Zeke.

Are we to believe that the only times the angel has come out to play have been when Dean has called for him? As nice as it would be to believe what he has told Dean, he is an angel. Sam was the one to empty the bowl and perhaps the reason he checked the syringes was because the angel in his body had taken one. If that is the case—and that’s a big if—why would Zeke be doing that? Is he trying to finish what Sam couldn’t? Is there another reason? Could this be why he offered to possess Sam?

Finally, there is a power struggle for hell, between the King of Hell and the Knight who wants to be the Queen of Hell, and that call, whether Crowley really cared about it or the blood, did tease something I hope happens this season: Crowley versus Abaddon. Both Mark Sheppard and Alaina Huffman have been so great in their roles and having them in scenes together is such a treat that SPN needs to take advantage and have more of that.

But now I ask you, the readers. What do you think Crowley was doing with that blood? Do you want to see a Crowley/Abaddon showdown this season?

Find Cable TV providers in your area (to watch as much Supernatural as you can) by entering your zip code below:

Why ‘The Cleveland Show’ Was Inherently Destined To Fail
What is the Best Blu-Ray Player?