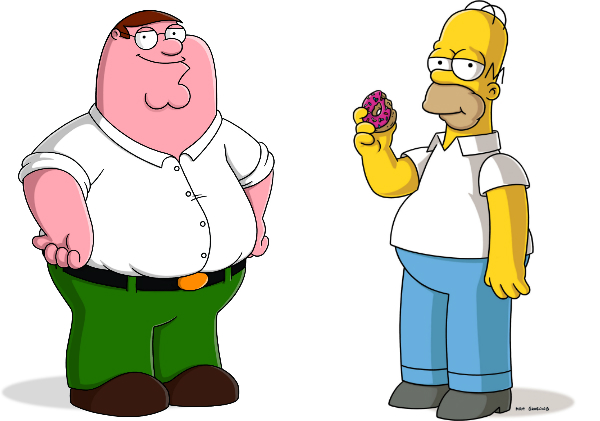 “The Simpsons” and “Family Guy” are joining forces for an epic cartoon crossover. So how will FOX’s funny animated families react when they finally meet? A sneak peek of the FOX special reveals things don’t go so great. When the Griffin family arrives in Springfield, Peter is immediately suspicious. He warns his family not to drink the water because everyone “looks like they have hepatitis.” At first, Homer and Peter bond over donuts and beer, but things start to go sour when Homer disses Pawtucket Patriot Ale by calling it a Duff rip-off. He also perturbs Peter by failing to properly set up a “Family Guy” cutaway gag. Bob from “Bob’s Burgers” pops up in the plane-themed gag, and Peter burns the loveable burger man by saying that he and Homer have to carry Bob “because he can’t fly on his own.” Peter better watch his mouth – “Bob’s Burgers” doesn’t need cutaway gags, time machines, and “Star Wars” specials to be entertaining. All it needs is a guy and his grill. The footage reminds us just how different “Family Guy” and “The Simpsons” are when Stewie cracks a painfully unfunny rape joke while making prank phone calls with Bart. Homer also fills in for Peter’s giant yellow chicken nemesis in a lengthy fight scene. “The Simpsons” and “Family Guy” crossover episode will air September 28 on FOX, which is the same night viewers find out which “Simpsons” character will die in an episode titled “Clown in the Dumps.” The “Family Guy” and “Simpsons” mash-up isn’t the only cartoon crossover involving FOX cartoons. Let’s take a look at four others from the Animation Domination block. 1. The “American Dad!” crossover with “Family Guy” and “The Cleveland Show” Seth MacFarlane’s three FOX series got hit by the same hurricane in an Animation Domination programming block that ended with the “American Dad!” episode “Hurricane!” This is where Peter Griffin, Cleveland Brown, and Stan Smith finally meet face-to-face after their houses wash up next to each other during the hurricane. Stan accuses Cleveland of being a looter and pulls a gun on him, and Peter joins the standoff by pulling out two guns. The showdown ends when Stan accidentally shoots Francine. Peter has a good guffaw at her gushing blood and dubs the scene “classic American Dad!” As “South Park” character General Disarray would say, “The Simpsons already did it.” Homer and his family weathered a hurricane in the 1996 episode “Hurricane Neddy.” It crossed over with “The Critic” when Jay Sherman appeared in a mental institution. 2. The “Family Guy” crossover with “American Dad!” and “King of the Hill”   The bizarre “Family Guy” episode “Bigfat” begins with the Smith family from “American Dad!” moving into Cleveland’s old house. The Griffins decide to pay their new neighbors a visit, but things quickly start to go south after Peter sees Roger and assumes he’s a dog, which Roger assumes about poor Meg. Of course Peter immediately tries to call all his friends after finding out Roger is an alien whose existence needs to stay a secret, but Stan kills him before he can blab. It turns out this entire scene was just Peter’s dream – sort of. Things get really weird after Peter wakes up and sees Hank Hill casually stroll into his bedroom. The cartoon “Inception” continues when Hank wakes up and complains, “Damn it. I always wake up before I find out if they can understand the baby.” Apparently the Griffins and the Smiths are just the creation of Hank’s twisted mind. 3. The “Archer” crossover with “Bob’s Burgers” H. Jon Benjamin voices both Bob Belcher and Sterling Archer, so of course this crossover episode just had to happen. In the “Archer” episode “Fugue and Riffs,” Archer gets amnesia, grows a mustache, marries a woman named Linda, and starts calling himself Bob. Luckily, his superspy past starts to return to him when he kills a Russian goon by stabbing him in the neck with a spatula. So does the entire “Bob’s Burgers” series take place during Archer’s time away from the spy game? Or did something happen to the original Bob? Archer calls himself “stepdad,” so at least we know Linda didn’t “Overboard” Archer by telling him he was her husband and the biological father of her children. There are so many questions about this episode that will probably never be answered. Maybe someday “Bob’s Burgers” will do an “Archer” crossover by having Pam Poovey drop by the Belcher family restaurant to grab a burger or two. She’d probably be a fan of the “Kale-caine Blues” burger special with kale and blue cheese. 4. “The Simpsons” crossover with “Futurama” Good news, everyone! “Futurama” is returning to FOX. According to Entertainment Weekly, Bender is going to pull a Homer by trying to get his shiny metal fingers on Bart Simpson’s skinny yellow neck. In “Simpsorama,” Bender travels back in time to kill Bart after the mischievous boy does something in the present that “has terrible consequences for the future.” There’s no word on what this might be, but Bart’s dad does work at a nuclear power plant. I’m also betting that aliens Kang and Kodos will pop up somewhere in this episode, and Bart and Bender might actually end up bonding over their love of behaving badly. The crossover episode will feature a riff on the “Futurama” opening credits and the funny tagline, “A show out of ideas teams up with a show out of episodes.” You can check it out on November 9. Are you more excited about seeing the Griffins in Springfield or hearing Bender Bending Rodriguez say, “I’m back, baby!” again? Photo: FOX Find Treva on Google+