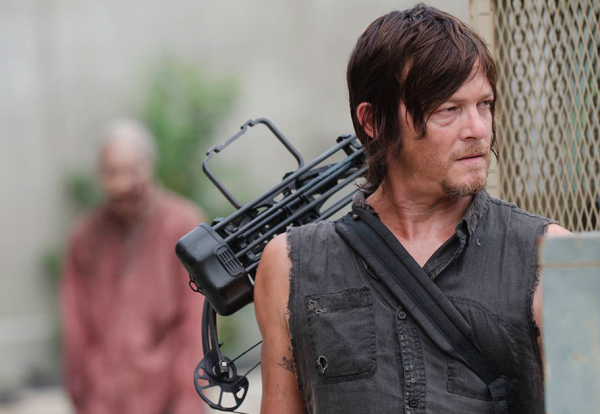 Q: What can fans expect from the second half of this new season?

Reedus: It’s so controversial and so intense and well done, that I’m super excited for people to see it. There are certain characters doing certain things that are so hardcore. It’s super interesting, and very well done; cleverly written, and very well acted and directed, so it’s very good.

Q: What is your opinion, as an actor, about Daryl’s reaction towards Rick sending Carol away due to her actions?

Reedus: We worked on that scene, and it was written a little differently before we shot it—it was written so that it was explaining to me what happened, and I was upset about it, but I understood, and I kind of just moved forward. Scott Gimple, Greg Nicotero, and I worked on that scene to make that conversation open-ended; like we were done having that talk, and wanted to wrap it up in a nice little bow, so to speak. You know I’ll always have Rick’s back no matter what, and we’ve all done things in the world that are inexcusable, but we’ve all been pushed to do things that we would never had done in a normal circumstance. We wanted to leave that conversation as if Daryl’s going, “let me process this for a second,” so that he understands but he’s not done talking about it. So we left it like that, because there’s no way at the end of that scene, Daryl is happy with that decision, but it’s something we’re not done talking about yet. Then we get attacked, and we never get a chance to finish the conversation. We worked on that scene a lot to make it a much better scene so that that conversation is open-ended, and we’re not done talking about it—Daryl is not happy about that at all.

Q: What does it feel like to know that you have such a strong fan base, due to your super-human like character?

Reedus: The writers give me cool stuff to do and it’s hard not to look cool with a cross bow, riding a chopper. They give me interesting things to do, and the deal with that character is that he’s sort of doomed to become the new Merle; Merle went away and slowly found out that it was ok to be himself with all these other people. He showed a sense of self-worth with these other people and you see this guy trying to be himself and people relying on him for the first time in his life, and that relates a lot to real life. What you say is important and what you do is important, and who you want to be is important, and you have guys stepping up to the plate and that’s interesting because if this didn’t go down, he probably wouldn’t be this guy. It’s interesting to watch a grown man realize he’s a man.

Q: Did you want your character to be the one who got to finally kill the governor?

Reedus: It was funny because all of us were fighting to kill the governor. Everybody had a reason to kill the governor but it was the governor or the tank, and the tank is pretty cool too. It’s interesting because the thing with Scott and David is that both of them are such good actors and are so fun to work with, that that whole day was just so depressing because we lost both of them. Scott was just at my house, he stayed with me in New York, and I took him to the Lou Reed Memorial at the Apollo and he’s a good friend of mine. It’s hard to lose anybody on the show because we’re all such a close family and we all really like each other.

Q: What can you tells about where the next episodes are going, and where will they pick up?

Reedus: Everyone’s assuming everyone is dead at this point, and everyone is back to their funeral point that they started the show at. So all the security we’ve had until this point is gone, so we’re back on the run again for our lives. Everyone’s at these horrible places in their heads; there’s not safety, no friends anymore, and none of that family that we worked so hard to create. Everyone is just on the run for their lives at this point, and nobody’s assumed that anybody has made it.

Q: Fans have pointed out that your look has changed this seasoned. Was this a personal choice or was it done for the show?

Reedus: They did it on the show but we’re trying to keep our hair the right length that we think it would be for story line. And to be honest, growing your hair out like a wild man, might not be the most attractive look on a person, but I’d rather it be real than me pose for magazines. I’m trying to keep this show as real as possible, as we all are, so Hershel’s hair got really long, my hair got really long.

Watch Norman Reedus on “The Walking Dead” on AMC at Sunday on 9 p.m.

“Bones” Returns to Mondays: Celebrate With 5 of the Best Episodes of Season 9 So Far
New “Tonight Show Starring Jimmy Fallon” Brings in Viewers From All Generations