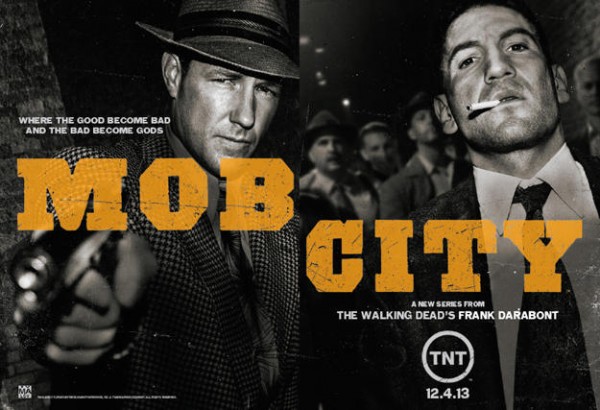 Milo Ventimiglia, Ed Burns, and Robert Knepper are starring in TNT’s eagerly anticipated new television series, Mob City. The show, from The Walking Dead’s Frank Darabont, tells the story of Los Angeles in the 1940’s based off real-life accounts of the cops and the gangster’s life. Ventimiglia, Burns, and Knepper held a press conference at NYCC to discuss the new project.

Q: What is the show about?

Ventimiglia: It’s the war in 1940’s between the cops and the mob.

Burns: Frank would explain it a lot better [laughs].

Q: Was it hard for you to shoot? Were you immediately on board? Any hesitation?

Ventimiglia: There was no thought I know for me and you all [pointing to Burns and Knepper) openly discussed it.

Burns: It’s sort of a no brainer, it’s Frank.

Knepper: I remember asking that question in the pilot. I was dying to work with Frank. Every actor who films with Frank said the same thing…when Frank calls you try to work it out — and the fact that he likes you and he wants you there is a really nice feeling. We each have our own specific thing that he saws, that he knows. [Burns] wealth of films and respect in the business, for me it was Prison Break, which I realize is a beautiful rip off of Shaw Shank [laughs]…he embraced it and loved T-bag. Milo for you?

Ventimiglia: I put myself on tape. As I hear, Frank said who the ‘F’ is this guy, in a good way. It was Frank, it was the material. It was, what the story was. My family you know coming from Chicago…I would always hear the stories. So, who doesn’t love gangster pictures? For me, knowing that Frank is at the helm and we have these great cast of characters — I mean it’s beautiful, beautiful script. When us as actors get to see something on page, you don’t have to act, you just have to show up and say the words. But then when you get around such great players you can embrace who your character is. It’s a really wonderful process.

Q: With so many shows breaking the violence barrier, did you have any trouble with that?

Burns: It’s not network, it’s basic cable. So, I was kind of pleasantly surprised that we are allowed to basically do and show and say almost everything. When you are making a gangster show you want that room to make.

Q: You are tackling a role that has been played by many actors in the past. What was your way of tacking Busgy?

Burns: I purposely did not look at anything, specifically the Warren Beatty film. I did some reading and a little research on the time period. But really, Frank just said to me that this guy has to be larger than life. When he walks into a room people need to literally love him and fear him and just have fun with that. Joking around when I did my research and saw it was Brooklyn I said okay I don’t have to work on my accent which works for me if you have seen my work.

Knepper: Walking onto set you know everyone knows Ed Burns. [In the show] I have been best friends with this guy since I was a little kid and you can’t manufactuer that, you can’t manufacture that kind of relationship. Ed came on the set and immediately… you immediately reached out to everyone. It really pulled us together.