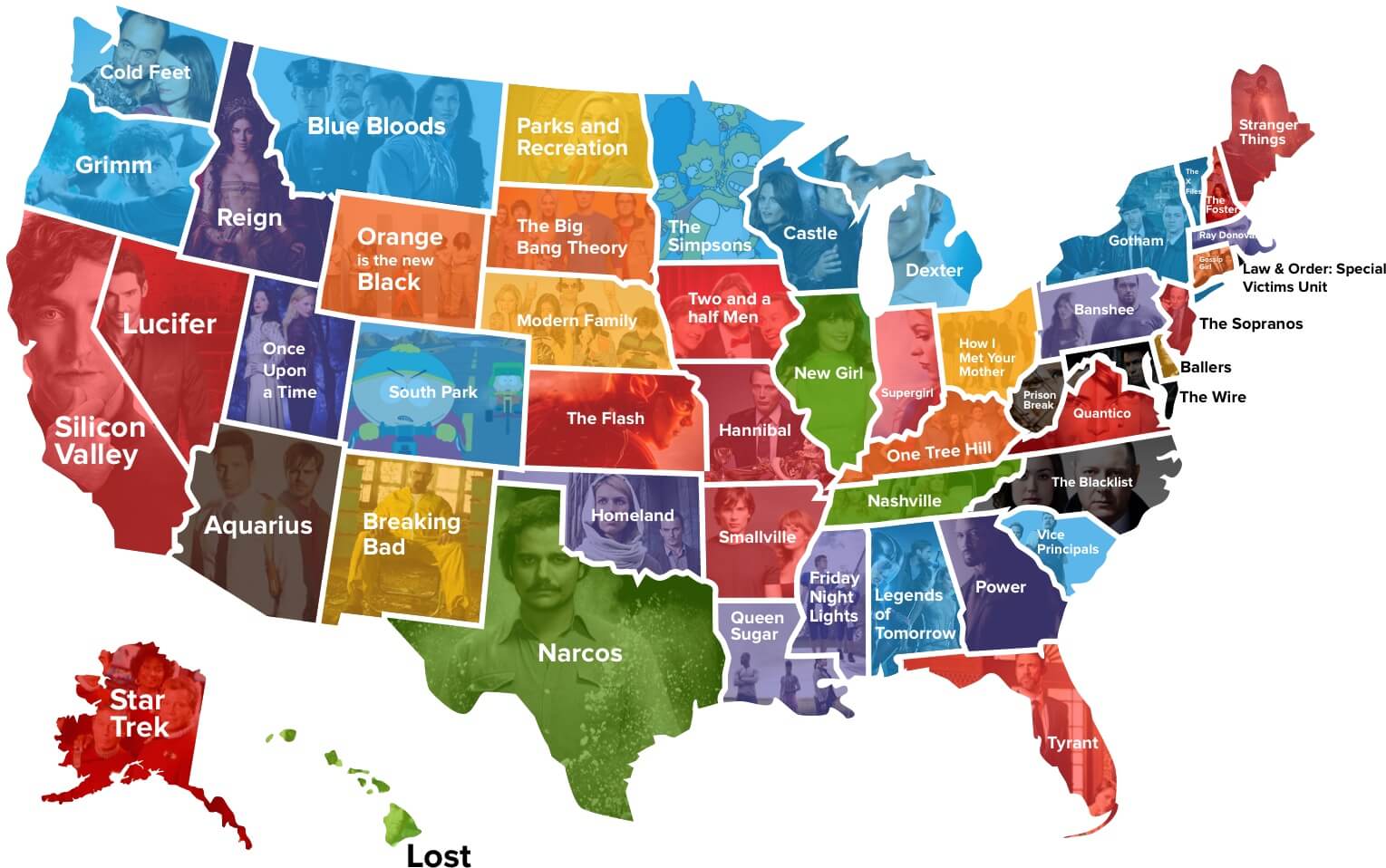 TV season has officially begun and networks continue to debut their fall showstoppers as we all snuggle up, prepared to binge watch. While a few shows are popular across the country (winter is coming), each region and state has their own favorite flavor of entertainment. Here at CableTV, we mined the data to answer one existential question vital to our existence.

What is everyone watching? Yes, just about everybody is tuning into Luke Cage right now if Netflix outages have anything to say about it.  But we wanted to dig deeper.

What are the TV shows that were uniquely popular to each state?

We looked at the top 200 most popular TV shows from IMDB (Internet Movie Database. Duh.), cross referenced Google Trends data from the past twelve months, and came up with the most statistically significant, unique TV program in each state. For example, Silicon Valley is not the most-watched show in California, but it is more popular per capita in California than in any other state.

The verdict? We like to watch dramatic versions of ourselves. Figures.

In the map you’ll see clearly that the popular show in each state sums up something important about that region. Arkansas is content to be part of Smallville, while Californians recognize the humor in Silicon Valley. DC is predictably obsessed with Scandal and those in Sin City are attracted to Lucifer. Each state’s preferences seem to be drawn to the familiar, where they identify with characters that sound like themselves and places that look like home.>/p>

In the map, you’ll see plenty of fascinating regional trends. Many parts of New England are drawn to dark dramas and the paranormal, like Stranger Things and Ray Donovan. Journey south and you’ll find a decided preference for the small town settings and light-hearted comedies that are major network fare. The Midwest is struggling with good and evil, indulging in TV about superheroes and serial killers. Go west and the popular shows trend towards quirky, dark comedies and fantasy shows like Grimm and Once Upon a Time.

Most Popular TV Show in Each State:

Iowa: Two and a Half Men

Ohio: How I Met Your Mother

Utah: Once Upon A Time

Wyoming: Orange is the New Black

Once we got a look at how each state was shaping up, we couldn’t resist drawing some more correlations. We gathered state data on income, education, well-being, crime, and obesity to discover not just what TV we watch, but what our TV viewing has to say about who we are. And we found some doozies. To see more fascinating details about how what we watch reflects who we are, visit our detailed data breakdown. Did the most popular TV show in your state surprise you? Let us know in the comment section below.