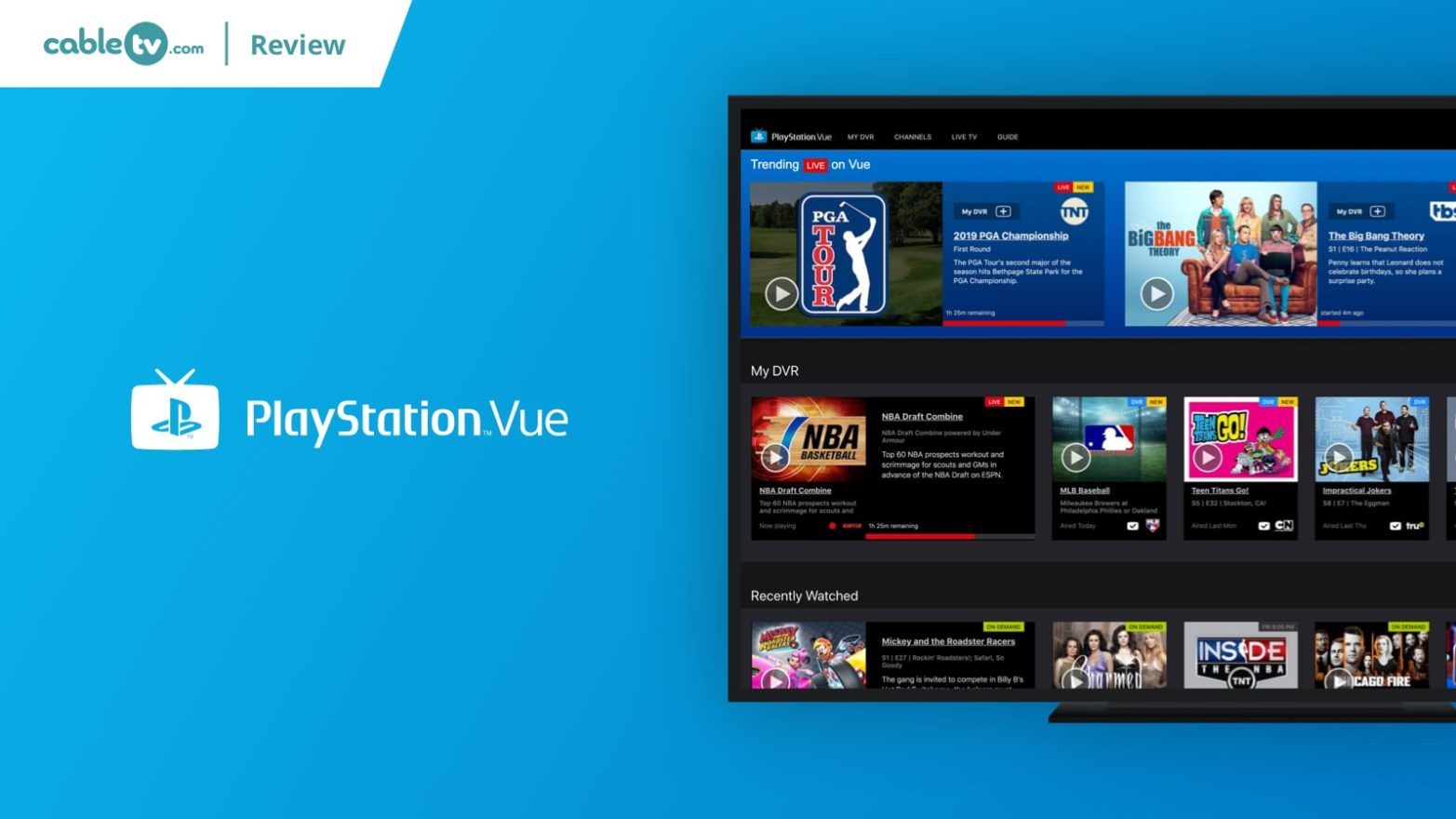 The bottom line: PlayStation Vue is more than games

First things first: PlayStation Vue does not require a Sony PlayStation gaming device. It’s an independent on-demand and livestreaming TV service for even non-gamers who think Red Dead Redemption is a shade of nail polish.

Vue is also no PlayStation afterthought product. With a wide selection of local, entertainment, and sports channels, PlayStation Vue stands up to any other livestreaming service on the cord-cutter market.

But it’s also pricier than most of the others—nearly to the point of defeating the purpose of ditching cable in the first place.

We couldn’t find any current promotions or discount deals on PlayStation Vue streaming TV plans, but we’ll keep looking. Check back in with us and we’ll try to help you save a few bucks.

Data effective as of 08/09/2019. Offers and availability may vary by location and are subject to change.

PlayStation Vue’s Ultra option gives you the most channels, with no lineup-stuffing fillers like shopping or music channels that cable and satellite providers force on you. Our favorite Vue plan is Core, which gives you a near-complete array of popular channels (50+) at $54.99 a month.

Pricing aside, PlayStation Vue looks like a contender in the live TV streaming game. Whether it’s right for you will depend mostly on your TV appetite: Do you want all of the channels? How about tons of local channels and college sports?

If yes, PlayStation Vue is worth a look. Few other livestreaming services offer as many choices, especially when it comes to local ABC, CBS, FOX, and NBC availability.

But pay attention: Vue’s free trial period is shorter than other streaming services, just five days where most others offer seven. You’ll have to make up your mind before the weekend, apparently.

You’re able to livestream the channels, as well as call up most previously aired shows and movies on demand.

No South Park or Lifetime movies? Rough. You’d have to subscribe to a second streaming service (like Philo TV) to get those missing channels.

PlayStation Vue’s first, and only, foray into original programming (through PlayStation Network) came and went quickly a few years ago: Powers, a gritty 2015-16 superhero series based on the Marvel/Icon Comics title, had money and hype behind it, but was canceled after two seasons.

Soccer fans won’t find much to kick around on PlayStation Vue, either, as neither beIN Sports or Eleven Sports are available (though FOX Soccer Plus can be added for an additional $15 a month).

Likewise, Golf Channel and Tennis Channel aren’t available on all packages, and Pac-12 Network is nowhere to be found. If you’re into these sports, you may want to check out fuboTV, instead.

Our favorite PlayStation Vue package is the $54.99-a-month Core plan, which offers plenty of popular entertainment and sports channels at a comfortable price.

After saving a little cash on that lower-cost plan, you may want to spring for a channel add-on or two—and PlayStation Vue has several to choose from.

Combine PlayStation Vue with another service

If PlayStation Vue and its channel add-ons don’t give you everything you want, try pairing it with another streaming service to fill in the blanks—you’ll probably still save money compared to a cable or satellite subscription.

PlayStation Vue’s cloud DVR is generous, with a twist: Instead of allotting a set amount of storage hours, you get unlimited space—but only for 28 days.

If you’re the kind of viewer who falls behind on shows or likes to keep aspirational episodes of Love It or List It at the ready, it’s not optimal. Efficient DVR viewers can probably live with it, though.

All of PlayStation Vue’s packages allow up to five simultaneous streams within the same home Wi-Fi network—but it’s not quite that simple.

Once you subscribe, you’ll automatically have access to three simultaneous streams, both in-home and on the go. If you designate a “home” device (meaning, setting your Apple TV, Roku, etc. as your main viewing source), you’ll have a total of five streams available in the home or three mobile.

But know this: you can set your home device only three times before you’ll have to start the subscription process over again.

Save yourself some clicks: If you plan on moving around frequently and don’t need five streams, it might be best to skip the “set your home device” step to avoid re-registration hassles.

Up to two in-network PS4 consoles can be used at the same time with a guest login but only one PS3. There are also mobile restrictions on some channels and shows (indicated by a Mobile Restricted badge), as well as regional blackout rules on certain sports events.

You can watch PlayStation Vue on PlayStation 3 and PlayStation 4 consoles, but not on Nintendo or Xbox—no surprise there. The Sony vs. Microsoft turf war has raged on forever, though a recently announced partnership could change things going forward.

Vue is compatible with a variety of non-gaming streaming devices, despite the perception that it’s only for PlayStation consoles—exclusivity is so last year.

PlayStation Vue is supported on these devices:

PlayStation Vue’s channel grid is quick and informational, though it takes getting used to if you’re coming from cable. It’s set up horizontally, not vertically, so you’ll be scrolling sideways through channels.

PlayStation Vue streams at 720p and 60 fps (frames per second), which is indistinguishable from a cable or satellite HD signal—even if you press your eyeballs right up against the screen, which we don’t advise.

Check your ‘net: With a strong internet connection (at least 25 Mbps), Vue experiences little in the way of buffering or playback interruptions. If you think fuzzy YouTube videos are frustrating, try making it through the Game of Thrones finale with draggy internet. Actually, don’t.

Some of PlayStation Vue’s on-demand content is available in Dolby Digital 5.1 Surround Sound, but the majority streams in 2.0 stereo audio, the industry standard.

The average listener probably wouldn’t be able to tell the difference, even with ears right against the speakers, which we also don’t advise.

Our final take: PlayStation Vue offers a lot—at a price

Among streaming TV services, PlayStation Vue offers more channels and features than most of the competition, but it’s also a bit pricier across the board.

If you watch a wide variety of entertainment and sports TV programming, PlayStation Vue is easily worth the extra expense. More casual TV consumers might want to look elsewhere—cutting the cord is also about cutting costs, after all.