Because we do sell cable and internet service, we teamed up with a third-party survey company to help you, the customer, choose the best TV provider. Our results were objective, unbiased, and representative of U.S. TV customers. Of course, you’ll have to enter your zip code to see which providers are actually available in your area. We compared the following major brands: When we talk about “cable providers” in this report, we’re referring to the group of providers above. Here’s an example of how users saw our questions:

Providers had thirty to 260 completed surveys each. How’d our providers do? Let’s start with overall satisfaction and then break the results down by area. 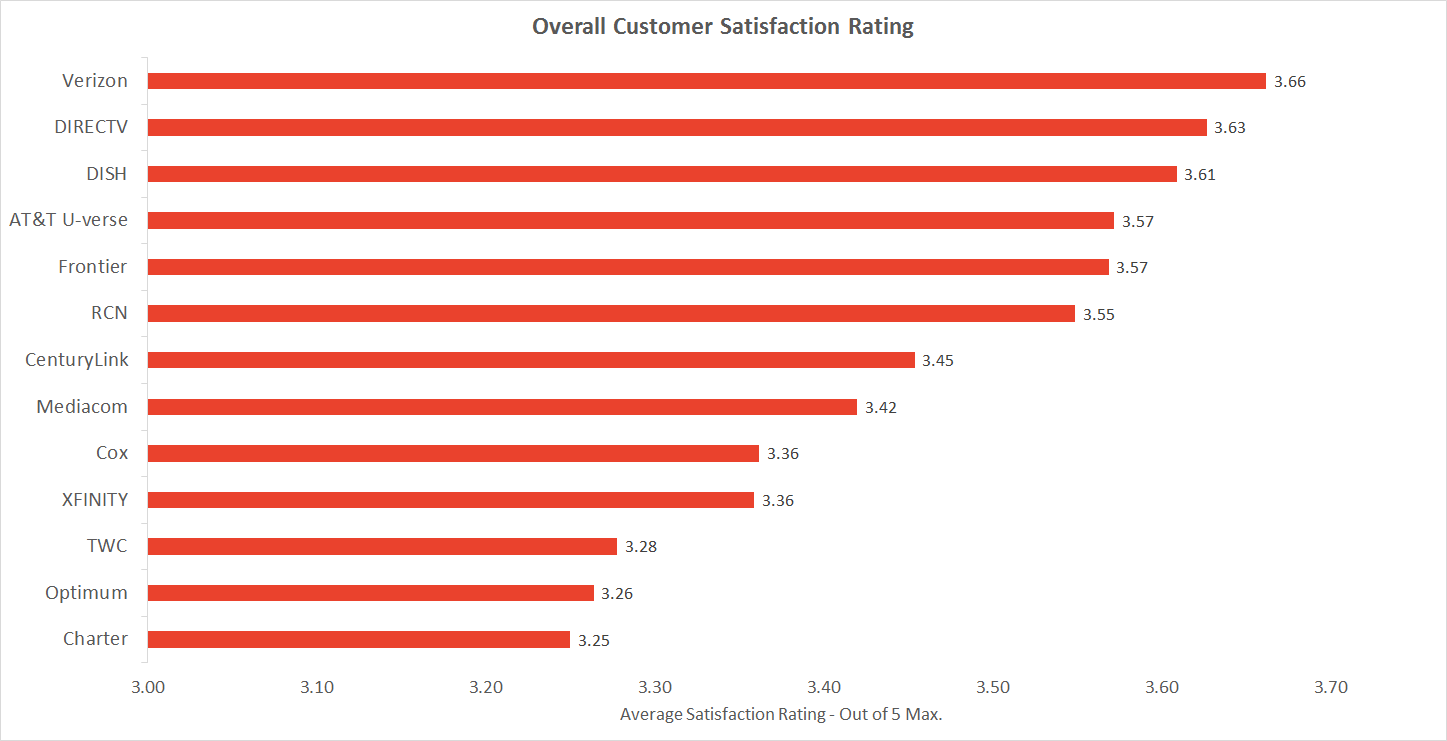 Customer satisfaction among fiber-optic and satellite providers is generally higher and that held true in this year’s survey. However, the disparity between the two types of providers narrowed. While fiber optic and satellite customers gave lower satisfaction ratings across the board in comparison to last year, several cable providers were actually able to improve their customer satisfaction in key areas like service and installation. The overall forecast is a more even playing field for providers in the telecommunications industry. In order to hold onto those gains and continue to improve, cable providers will need to focus on excellence in service and reliability without the steep price increases that have caused such rampant consumer frustration. 2016’s Best TV Provider: Verizon FiOS While most of Verizon’s satisfaction ratings slipped in comparison to last year, they still edge out the competition overall. High rankings in channel selection and reliability as well as above average performance in installation, cost and customer support helped Verizon beat all cable and satellite TV providers. For the second straight year Verizon FiOS scored as the best TV provider in customer satisfaction. Biggest Improvement Overall: Frontier and Time Warner Cable Frontier recently expanded their network and, despite a bumpy transition in a few Verizon markets they absorbed, customers are giving the provider high marks in channel selection and cost. Frontier even came close to beating AT&T’s popular U-verse TV in overall customer satisfaction. (3.569 vs. 3.572) Time Warner Cable (TWC) had abysmal ratings last year in several industry satisfaction surveys and committed to improve. Those efforts appear to be making a difference as TWC rose in this year’s survey in every area of satisfaction except channel selection. Don’t be fooled, however, by the cheery outlook. Time Warner Cable is still lingering at the bottom in terms of satisfaction among cable TV customers. With an acquisition by Charter on deck this year, TWC customers could face some significant changes. Needs Improvment: DISH, DIRECTV, and AT&T U-Verse All of the providers fell in this year’s CableTV customer satisfaction ratings. To be fair, these service providers had strong ratings last year and continue to lead the pack in satisfaction. But DISH, DIRECTV and AT&T lost some goodwill from customers for a variety of reasons. DISH has struggled with complaints about customer service issues. DIRECTV increased rates this year, which may be at the bottom of their slipping numbers in the survey. AT&T acquired DIRECTV and expanded their fiber-optic network in some areas, but systemic customer service and support complaints continued.

“How satisfied are you with your TV service install and setup? (Fees, scheduling, etc.)” 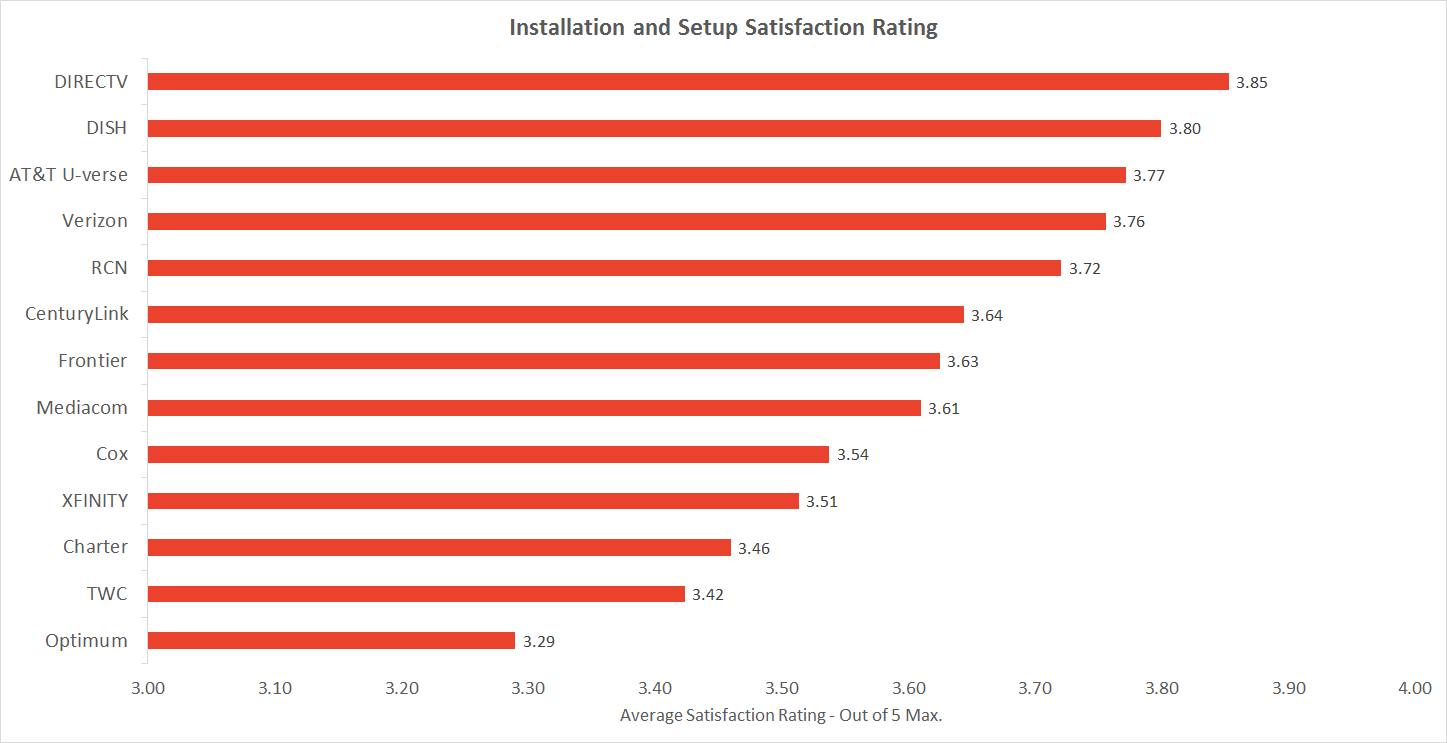 “How satisfied are you with your TV package’s channels?”

Many customers continue to search in vain for the holy grail of channel selection. That perfect mix of everything you do watch and all the premium stuff you’re missing out on for an affordable price. If satisfaction ratings are any indication, they haven’t found it yet. Ratings stayed fairly static across most providers with the exception of Frontier, Mediacom and Charter. Best in Customer Satisfaction, Channel Selection: Verizon FiOS Verizon takes the cake here, not just for offering more premium channels in their packages, but for providing more HD content. They offer 315 channels in comparison to DISH’s 290 for a similar price point. Biggest Improvement, Channel Selection: Mediacom Even with a jump in satisfaction, Mediacom still ranks below average on channel selection. This rise in satisfaction may be related to some programming that was added within the last year, but in terms of every other rating, Mediacom appears to be disappointing its customers. Needs Improvement, Channel Selection: DIRECTV DIRECTV’s channel offerings remained mostly the same this past year but prices rose, so this slip in ratings is likely related to customers feeling that they are getting less bang for their buck in programming.

“How satisfied are you with your TV signal reliability?” 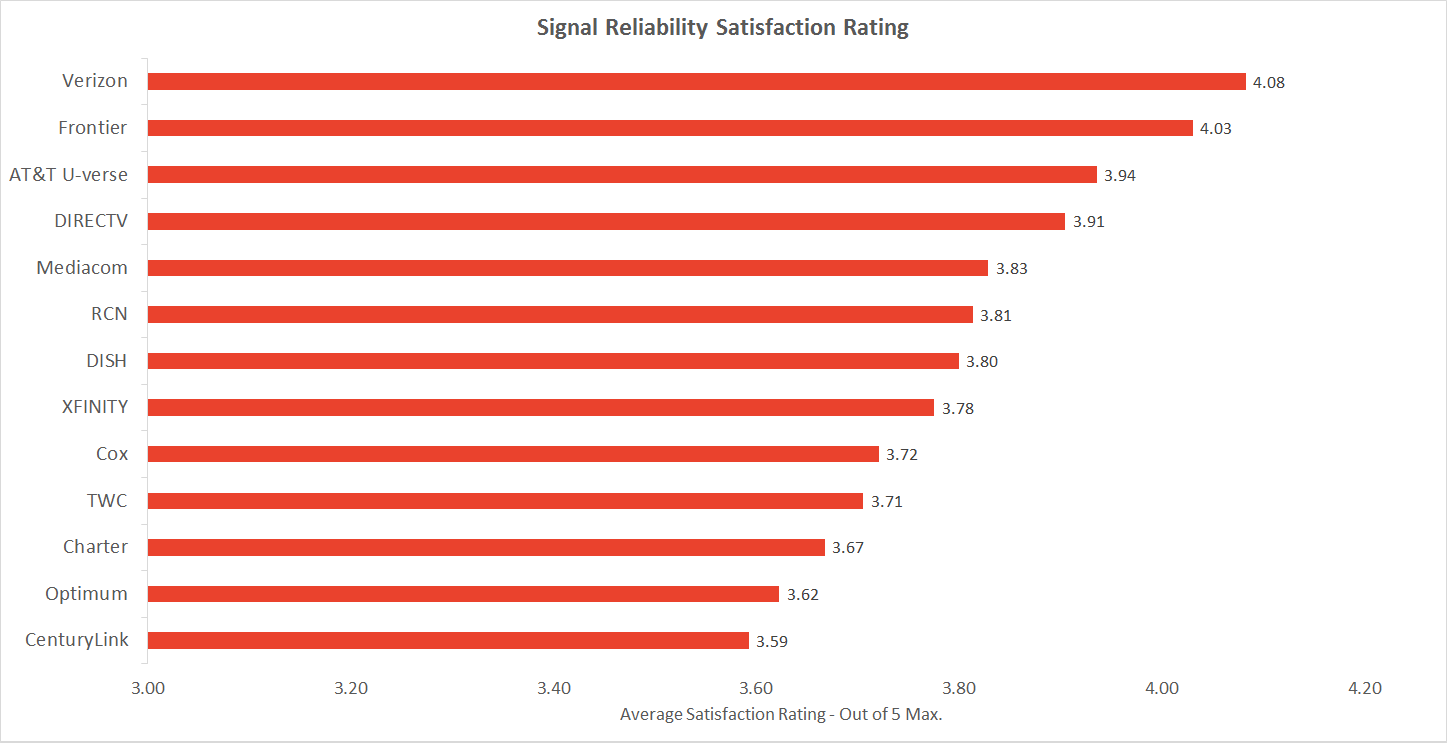 When a snowpocalypse is forecasted, cable and satellite customers nervously bite their nails and ask the same question: will I be able to watch the premiere of Game of Thrones, or will my provider leave me in the dark? Customers in the survey continued to lose faith in the consistency and reliability of signal this year with most service providers. Best in Customer Satisfaction, Reliability: Verizon FiOS Verizon edges out Frontier by just a fraction to take top honors in customer satisfaction with signal reliability. This rating, however, has slipped from the stellar marks they received in last year’s survey. Again, this may be in a large part due to staffing issues related to union strikes that left Verizon unable to respond quickly to outages and the aforementioned messy transition to Frontier in some markets. Biggest Improvement, Reliability: Time Warner Cable Time Warner Cable inches forward in the ratings for reliability but they’re still trailing far behind most other providers. TWC will need more than this year’s small improvement to reach average levels of satisfaction. Needs Improvement, Reliability: CenturyLink Outages galore have plagued CenturyLink for TV, phone, and Internet service as they sought to expand their market this past year. The PR nightmare continues with recent court settlements finding CenturyLink failed to respond appropriately to 911 outages that occurred two years ago.

“How satisfied are you with your monthly TV bill?” 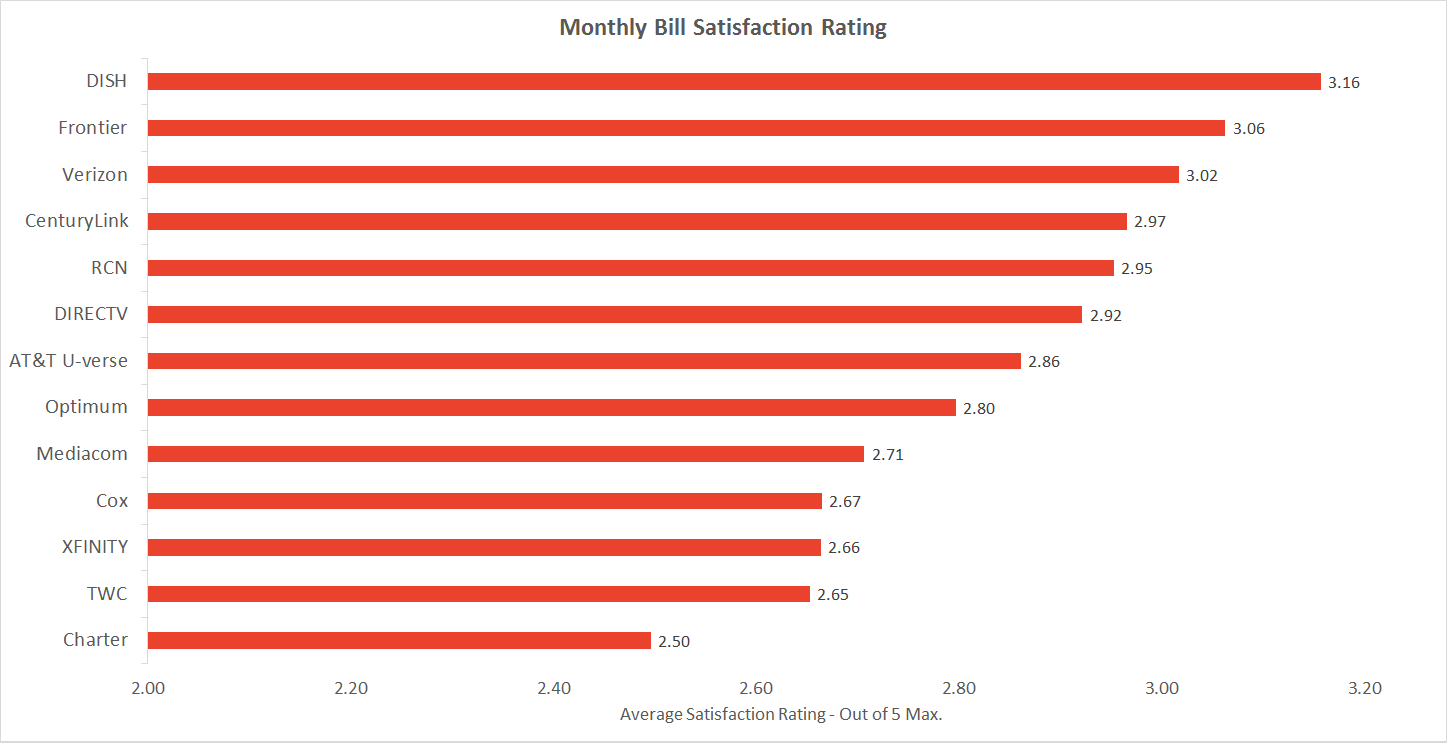 Customers embark on their relationship with a cable or satellite provider full of cheerful naivety. It’s a match made in heaven. All the television programming you could desire at an attractive price. Then the promotional period expires and the bill hits your mailbox. Long, frustrating telephone calls and disillusionment ensue. With the surprising exception of RCN, large traditional cable providers rank well below telecom and satellite companies. The sense of being taken advantage of has only increased in the past year, especially among the big cable providers like XFINITY and Cox. Best in Customer Satisfaction, Monthly Bill: DISH DISH held onto their rating from last year which gives them the lead for customer satisfaction in monthly billing. While customers may not be feeling the buzz of increased value from their DISH service, at least they aren’t feeling manipulated by hidden fees and confusing billing. Sometimes, no news is good news. Biggest improvement, Monthly Bill: Optimum While Optimum might not earn high marks overall, they do present an affordable option for their customers. This is especially true with some of the multiservice bundles that Optimum offers. Needs Improvement, Monthly Bill: Mediacom Much of the dissatisfaction with Mediacom’s pricing is likely associated with ambiguous fees and package pricing rather than actual cost. Customers report steep and undisclosed price increases at the end of the promotional period that are particularly deceptive given the messaging they receive on sign up.

“How satisfied are you with your TV provider’s technical support and customer service?” 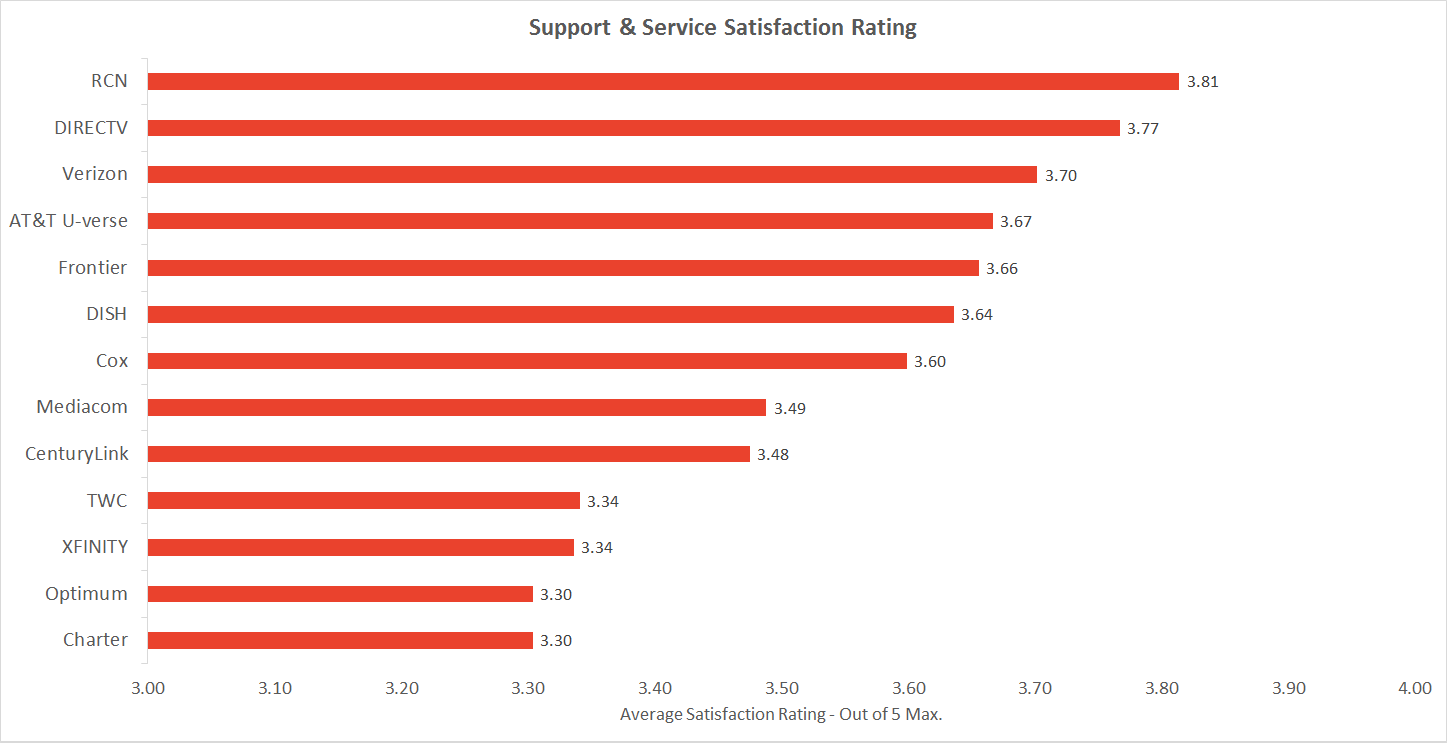 Customer service and support can make or break your cable and satellite TV provider experience. Your dish may be caked with ice, your bill might have suddenly gone up twenty dollars or your signal might be dropping every night without explanation. But a helpful, empathetic human on the other end of the phone to figure it out and make it right can transform a frustrating day. Cable and satellite TV providers still receive some the lowest marks in customer satisfaction across industries This is particularly true when we look at satisfaction in technical support and customer service. Most providers held steady in this area, but there were some significant rises at the bottom among satisfaction with cable providers that are worthy of note. Best in Customer Satisfaction, Tech Support and Customer Service: RCN Let’s give a warm welcome to RCN, the new kid on the block in this year’s survey. RCN managed a very strong showing in all categories, earning above-average ratings in installation and monthly bill. RCN shines in customer service and support, however. They beat out well-established providers like DIRECTV and Verizon for top honors. RCN snagged the Reader’s Choice Award from PC Mag for their superior service in 2015 and Cable TV’s customer satisfaction respondents obviously feel the same. RCN’s win in customer service is all the more surprising as a coaxial cable provider. RCN’s peers in technology are also winning awards — for being the worst companies in America to work with. RCN has shown it’s possible to provide cable service without angering customers. Biggest Improvement, Tech Support and Customer Service: CenturyLink CenturyLink’s customer satisfaction is on the rise, likely due to improvements simply in speed and availability that have increased overall satisfaction. There is still quite a bit of room for improvement however, as the provider ranks in the bottom five for customer service and support. For CenturyLink, this may be a case of too little too late for customers frustrated with ongoing outages in expanding markets. Needs Improvement, Tech Support and Customer Service:  DISH DISH didn’t experience a significant loss in ratings, but its competition held steady in customer service ratings, so even though the difference is small, it’s visible in the survey results this year. DISH has made improvements to its phone menus and softened its marketing tactics, so we expect to see improvements in customer satisfaction in this area coming soon.

The results above were not influenced by us in any way, and Survata states the results are objective and representative of the United States population. Remember that customer satisfaction ratings are subjective for customers, and may not be objectively correct. For example, we aren’t trying to make any claims about actual signal reliability and up-time, but we are confident the results show what customers feel about their TV signal’s reliability.

Verizon FiOS is once again the best TV service for overall customer satisfaction. Despite slipping slightly in overall ranking from 3.82 to 3.66, Verizon still won the channel selection and signal reliability categories. Satellite providers remain fiercely competitive, with DISH scoring a solid in in price satisfaction and DIRECTV winning in installation and setup satisfaction. Cable providers continue to lag in customer satisfaction: the bottom six providers are traditional cable providers, and only seven were included in the survey. RCN is the only cable provider breaking from the cable pack to beat CenturyLink, largely thanks to their surprising overall win in customer support and service. Customers continue to express dissatisfaction with their monthly TV bills with an average rating of 2.8; the next lowest rating is for channel selection at 3.5. Despite increased competition from streaming services and other cord-cutting options, subscription TV providers have failed to address customer complaints over fees, price hikes, and lack of transparency in pricing. Based on cable companies’ failure to improve satisfaction in key areas like pricing, we expect 2016 to be a year of surging Netflix subscriptions and falling cable subscriptions. 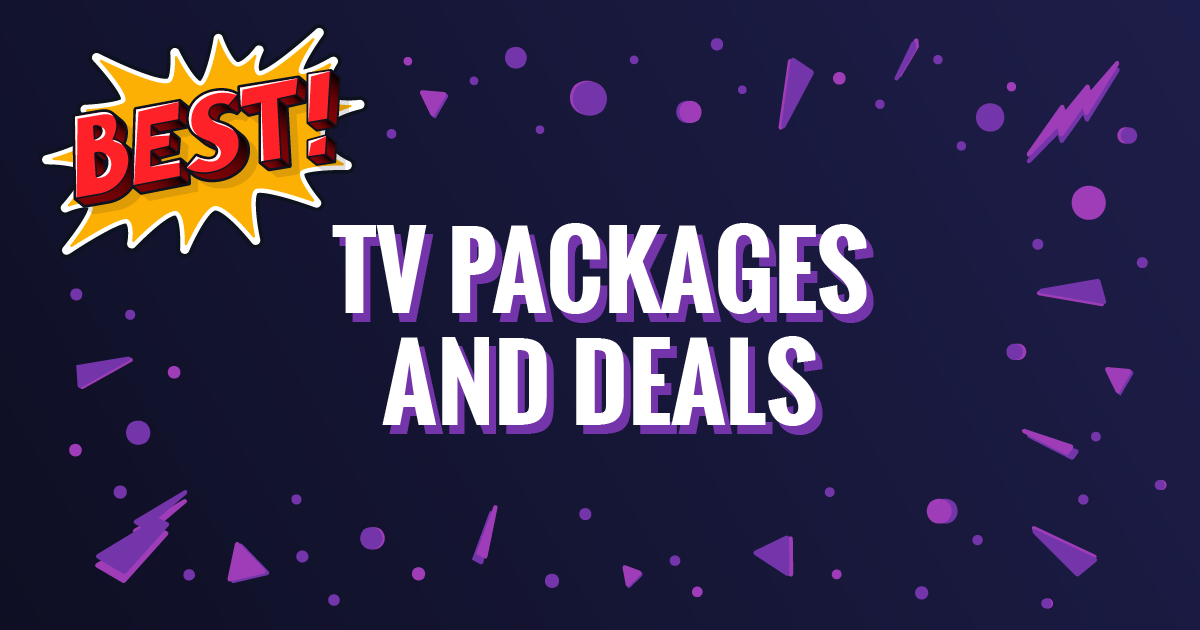 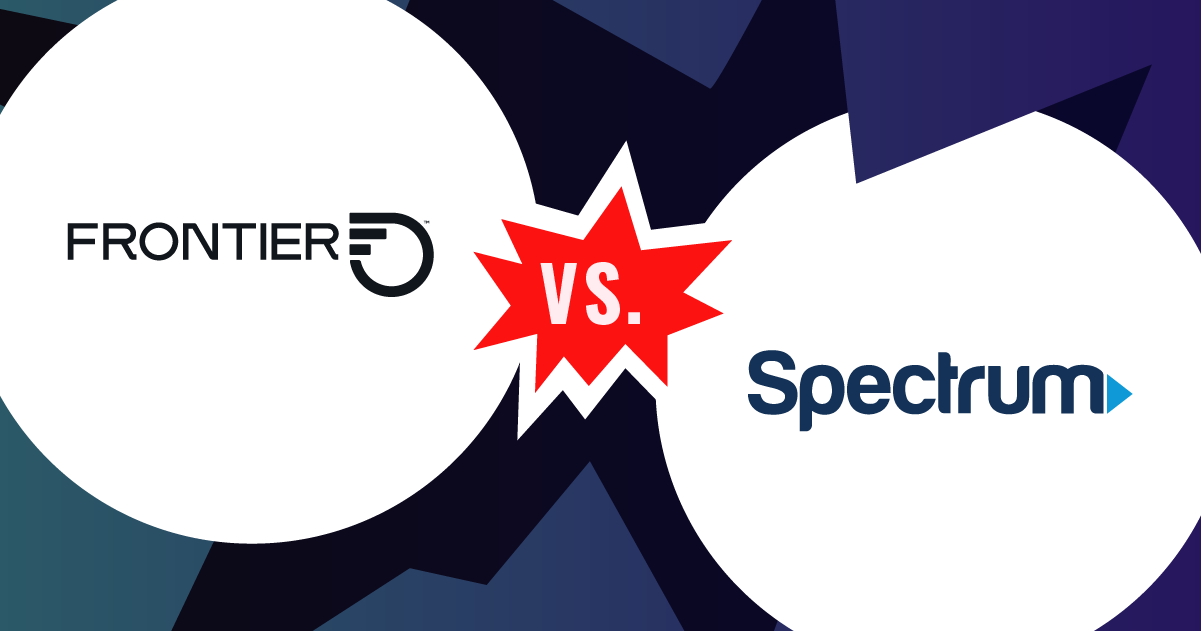 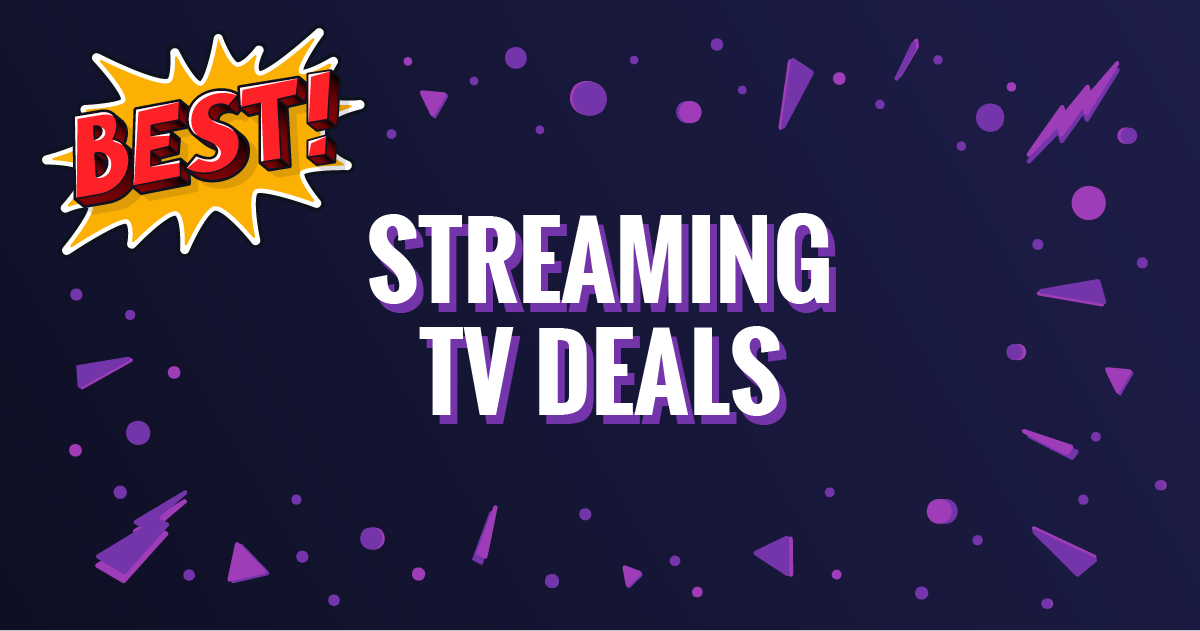