Name-Brand TVs vs. Their Cheaper Rivals: What’s the Difference?

You’re ready for a new TV. Is a name brand the only way to get a quality television, or should you take a chance on a lesser-known brand?

3 TV Name Brands to Bet On

When you’re looking for a top-of-the-line TV, LG is the way to go. Its top-tier offerings have superior picture and viewing angles, making it one of the most reliable TV brands. However, some models don’t have powerful built-in speakers, but this can be improved by adding a sound bar.

LG’s incredible picture quality is due to a combination of its pioneered OLED screen technology, 4K Ultra HD resolution, and high-dynamic range (HDR) to improve 4K color tones. For more information on each of these features, check our TV Features to Consider section below.

If you’re in the market for a truly spectacular TV, LG’s diverse lineup certainly has something for you. And while LG’s TVs can be expensive, the quality matches the price tag.

Honestly, you can’t go wrong with Sony. It’s more than just a trusted name—Sony produces fewer models than many other companies so it can focus on making each product as good as it can get.

Most Sony TVs are LED-LCD TVs with either full HD or 4K resolution. 4K models come with HDR. Check the TV Features to Consider section below for more details on these features.

Sony has also developed its Backlight Master Drive™ to get deeper blacks and a more accurate picture with LED-LCD TVs, making it better competition for LG’s OLED.

All things considered, you’re almost guaranteed to find a Sony TV that will meet your needs. And with its well-earned reputation for longevity, a Sony TV will continue to impress for years to come.

If you’re looking for a dependable choice, Samsung is worth considering. Most of its offerings have 4K HDR picture quality, though it still has some full-HD resolution TVs.

Although Samsung has produced both OLED and LED-LCD TVs in the past, it sets itself apart with its exclusive Quantum Dot TVs. These “QLED” TVs have long lifespans and improve Samsung TV’s color, contrast, and viewing angle over conventional TVs.

There’s a reason Samsung is the highest-selling TV brand in the world. With its well-known picture quality and renowned reliability, it’s a good fit for most homes. 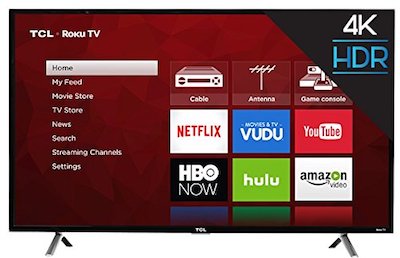 While the lesser-known TV brands struggle to keep up with name brands, a few rise to the challenge by integrating popular media streaming devices with their TVs. TCL has jumped with both feet into the Roku family, a popular collection of streaming players, and doing so has significantly increased TCL’s value.

TCL offers both full HD and 4K resolution, and it even has HDR offerings. While it doesn’t have the life-changing picture quality and viewing angle of an LG, it will still give you a lot of bang for your buck—especially if you don’t have a lot of bucks.

If you’re going with a lesser-known brand, this is the one we strongly recommend for both price and quality.

The quality of VIZIO TVs scales dramatically with its prices. The lower end is affordable, but the smart TV app is a little outdated and the picture is nice but not phenomenal.

On the other hand, higher-end VIZIO TVs use VIZIO’s Xtreme Black Engine™ for a uniform picture with deeper blacks, and they use Chromecast as the smart TV app. However, the prices are noticeably higher than brands like TCL, and a TCL TV might make you just as happy.

VIZIO offers great deals on TVs, so this may be your “in” if you’re looking for a big screen on a budget. Though its quality was once in question when VIZIO was getting off the ground, it continues to perform well for its price.

Element has followed in TCL’s footsteps by integrating a well-known media streamer: Amazon Fire TV. This TV even includes an Alexa-enabled remote control, so you can control your TV with your voice.

Along with 4K, Element offers full HD and standard high-definition resolution TVs. Pay attention to resolution if you purchase an Element TV because you wouldn’t want to accidentally end up with the outdated standard high definition.

Element’s picture is fine but not amazing, and the built-in speakers are underwhelming, so you may need to add a sound bar. Additionally, Element TVs aren’t known for longevity.

While it’s a competitor because of its fancy Amazon Fire TVs, we’d recommend a TCL Roku TV instead for a better experience at a similar price.

We’ve walked you through our brand recommendations, but you won’t hurt our feelings if you choose to go with something else. Still, we don’t want you stuck buying a TV you won’t be happy with. Here are some brands you should avoid.

Insignia has been the house brand of Best Buy for years, but manufacturing details still remain sparse. What’s not ambiguous are the lack of features, poor picture quality, and ongoing trouble that most owners have with these TVs. Some Insignia TVs come equipped with Roku, but if you’re in the market for that, the TCL Roku TVs are a much safer bet.

You’ll recognize the brand and low price from major retailers like Walmart—and probably the history of poor quality too. Most reviews online agree that the super-low prices are not going to make up for the excessive headaches this brand will cause you down the road.

If you’re in the market for a extra large TV, Sharp offers one of the more affordable options on the market. But Sharp hasn’t kept up with the competition in the last few years, and its lagging quality is apparent. Skip the huge TV, and go with a competitor that’s more dedicated to its TV lineup.

You can get a bigger TV for the same price by going with a lesser-known brand, but that’s only compelling if you have the space to fill. Many living areas are too small to make a 60-inch or larger screen worthwhile. Check out our TV Viewing Distance Calculator to calculate an appropriate TV size for your space.

While it’s currently offered through only specific channels, movies, and streaming services, 4K brings a far superior picture. 4K Ultra HD has four times as many pixels as full HD (1080p) sets. Standard high definition has only 720p, which rules out getting the best picture possible from Blu-ray and full-HD channels. To get the best out of 4K, make sure your 4K TV has complimentary HDR so it can display a greater range of color tones.

Smart vs. Not Smart

Smart TVs have integrated internet to make media services like Netflix, Hulu, Amazon Prime, and YouTube available right on your TV. This is great for streaming with nothing but your smart TV and a subscription, but keep in mind you can get the same effect with a “not smart” TV. All you need to do is stick a streaming player, like Roku or the Amazon Fire Stick, into it.

Display Type: LED-LCD vs. OLED vs. QLED vs. LCD vs. Plasma

LED-LCD televisions (LED-LCD TVs) use a liquid crystal display (LCD) panel to control where light is displayed on your screen, with lightemitting diodes (LEDs) to light the screen from the back, top, or sides. Backlighting is considered the most effective. Modern LED-LCD TVs have replaced both plain LCD TVs and plasma TVs, but TV companies are still looking for ways to set their TVs apart.

LG achieves this with organic light-emitting diode (OLED) display. Rather than using LEDs for illumination, each pixel on an OLED screen creates its own light. While the final picture isn’t as bright as an LED-LCD TV, OLED wins out on black levels and contrast ratio.

Samsung hasn’t been quite as effective with its Quantum Dot LED (QLED) TVs. These are LED-LCD TVs that use semiconductor nanocrystals, or Quantum Dots, to convert the backlight. This can improve color and contrast on LED-LCD screens but not drastically enough to put it ahead of OLED TVs.

Name-brand televisions are more likely to have improvements that make a noticeable difference in picture quality, but whether or not this warrants shelling out the extra dough is up to you.

Because LED-LCD technology is so new, it’s hard to be entirely sure how long these TVs will last. If you keep the picture settings in the midrange, you may get as many as 100,000 hours out of it. However, since that equals out to about fifty-four years if you watch the average five hours of TV a day, some part other than the screen will probably blow first, and it’s a lot easier to get replacement parts for major brand TVs than lesser-known brand TVs.

Luckily, protection plans from companies like SquareTrade are readily available on Amazon. If you choose to add one of those to any qualifying television, you’ll have coverage for breakdowns and malfunctions, and you’ll even get on-site service for larger TVs. The plans aren’t too pricey and may be worth the peace of mind.

Do you only trust name-brand TVs, or would you consider going the cheaper route? Let us know in the comments below.