The Ultimate Road Trip for Movie and TV Fans

By Jerusha Kamoji and Kenna Pierce Edited By Mikayla Rivera

If there are two things we’ve learned to appreciate over the past year, they’re TV and travel. As the COVID-19 Delta variant continues to surge, international travel plans remain uncertain. But, if you want to see where your favorite movies and TV shows were filmed, you don’t have to leave the country, there are plenty of filming locations within the US to visit.

We’ve created an interactive map based on the iconic filming locations of some of the most popular movies and television shows in the US. So, grab your favorite snack and some shades—it’s time to explore the mainland.

Go to Google Maps for filming locations and directions

Action and adventure fans, get your adrenaline off-screen

After you see Space Jam: A New Legacy this summer, check out where some of the action of the classic 1996 Space Jam took place at The Forum in Inglewood, California. The Forum is a multipurpose events center, and it’s also where Michael Jordan and Bugs Bunny shot hoops together on the court.

If you’d rather step into the action-packed Marvel Universe, head to Cleveland, Ohio. You can walk through the lobby of the Triskelion ( a S.H.I.E.L.D. facility) at the Cleveland Museum of Art. And visiting Wakanda won’t require a passport, as you can go to the Chattahoochee Hills Bouckaert Farm in Fairburn, Georgia, to see where the epic battle between T’Challa, Killmonger, and their armies was filmed.

We won’t judge if you’re tempted to yell “Wakanda forever!”

Drama from Coast to Coast

If you want all the feels, check out the sites of some of Hollywood’s most emotional moments.

When it comes to drama, Jane the Virgin has got to win a prize for squeezing pregnancy, murder, long-lost siblings, and love triangles into one series. To relive all those fun plot twists, you can check out the filming location of the fictional Marbella hotel at the Ritz-Carlton in Marina del Rey, California. The Ritz-Carlton was used for exterior shots, so picture Jane and Rafael walking outside as you enjoy the grounds and gardens.

There’s plenty of drama on the East Coast as well. One of the lavish weddings in 27 Dresses was shot in Marble House in Newport, Rhode Island. Period-drama fans may be waiting for the day when they can visit Pemberley across the pond. But if you want to escape modern life in a mansion on this side of the Atlantic, Marble House fits the bill.

The more you know: Docuseries and reality TV

We all know that reality TV isn’t exactly like real life, but that doesn’t make it any less fun to watch. Last year, we retreated into the wild world of Tiger King. (Was it really a retreat though?) Now you can head to the place where Joe Exotic’s tigers once roamed.

Looking for laughter? Check out these comedy locales

Always Be My Maybe is a rom-com about an (almost) couple reuniting 15 years after they pursue different life paths. The film was shot in several locations across the West Coast of the US and Canada but, lucky for you, there are several iconic Always Be My Maybe filming spots you can check out in the Bay Area.

Head to the Fairmont Hotel in San Francisco to see Keanu Reeves’s penthouse, or you can go to the Richmond District to visit Sasha’s (played by Ali Wong) childhood home. There’s also a cameo of The Palace of Fine Arts, which is free to visit 24 hours a day, seven days a week.

The Fresh Prince of Bel-Air is a family favorite but, contrary to popular belief, the mansion where Will Smith stays with his wealthy extended family is actually located in Brentwood, California—not Bel-Air.

Even so, fans are welcome to visit the architectural masterpiece during the day, and Los Angeles residents are now welcome to stay overnight. Smith announced in September 2020 that guests can rent his old room in the private wing of the Banks residence.

At $30 per night, you can enjoy the show’s iconic Philly cheesesteak in addition to other meals served on a silver platter by the mansion’s butler (it won’t be Geoffrey). Fashion lovers are invited to browse Smith’s wardrobe, including his vintage sneaker collection, and if you’d prefer to lounge, the pool is open too.

This is the perfect quick stop for tourists in the area, or a staycation alternative if you live in LA.

Get Out is a Jordan Peele classic that shed’s light on the awkward and unpleasant intricacies of interracial relationships in the US. Despite being set in upstate New York, the Armitage family home is actually located in Fairhope, Alabama.

Fans of the film can check out this house for free, so if you’re in Mobile Bay, head east to see where Peele’s 2017 masterpiece was shot.

Doctor Sleep gives Freddy Kruger a run for his money, and fans of Stephen King’s book-turned-movie franchise can visit several locations across Georgia to see where some of the film was shot.

In Atlanta, Georgia, head to the historic Plaza Theatre where scenes depicting murders by members of the True Knot cult were filmed. The cinema opened in 1939 and still screens older movies, so you can check out the latest show before heading out.

Vampire fans probably already know this, but you can also eat at the Mystic Grill in Covington, Georgia. Aside from being featured in Doctor Sleep, the restaurant was a staple for Elena, Damien, and Stephen from the Vampire Diaries series.

Sci-fi fans, this one’s for you

The God of Mischief is quickly becoming one of our favorite antiheroes with the release of Marvel’s new series Loki on Disney+, so here is a list of all the places you can visit to get your real-world Loki fix.

To see Stark Tower where the series begins, head to The Proscenium located on Peachtree Street in Midtown Atlanta, Georgia. You won’t need a tourist visa to visit the 1500s medieval church set in Aix-en-Provence, France, as the actual building, known as Westview Cemetery, is also located in Atlanta, Georgia.

Consider checking into the Atlanta Marriott Marquis in downtown Atlanta to get a better idea of how the series used the space to bring the Time Variance Authority (TVA) offices to life.

Lovecraft Country first aired in 2020 and the mixed-genre, historical fiction series is based off Matt Ruff’s 2016 novel, which has the same name.

Some of the most iconic filming locations featured on the show include Bisham Manor, which is located in La Grange, Georgia. There is a cameo of the mansion at the end of the first episode, and it’s also the set for the Netflix series The Haunting of Hill House.

The home is now a private residence but it’s definitely worth driving by.

Lovecraft Country is also filmed in Chicago, so head to Illinois to learn more about the history of the city’s African-American community. The intersection of W. 18 Street and S. Laflin Street in the Pilsen Historic District is where we meet the central characters. Located on Chicago’s West Side, Pilsen offers art, food, shops, and plenty of museums that share information on the cultural importance and working-class history of the area.

Famous movie locations in your state

As you’re planning a summer road trip, you might find a famous filming location right around the corner! We’ve broken our map into a state-by-state list, so you can check out the scenes that were filmed closest to you.

Last year, we tuned in to movies to get us through the good, the bad, and the ugly of the world around us. Now that it’s time to discover the joy of travel once again, go pack some snacks, use this map, and hit the road to find Hollywood drama and magic around every corner.

We selected popular movies and shows available on the most popular streaming services, along with some of our own favorites. We then sorted everything by genre, and we scoured the internet to find key filming locations for each movie or series.

This piece was created by CableTV.com and is in no way sponsored, endorsed, administered by, or associated with  any of the properties listed above or their affiliates.

Best CenturyLink-Compatible Modems 2021
How to Watch The Marvelous Mrs. Maisel

About the Author
Jerusha Kamoji and Kenna Pierce 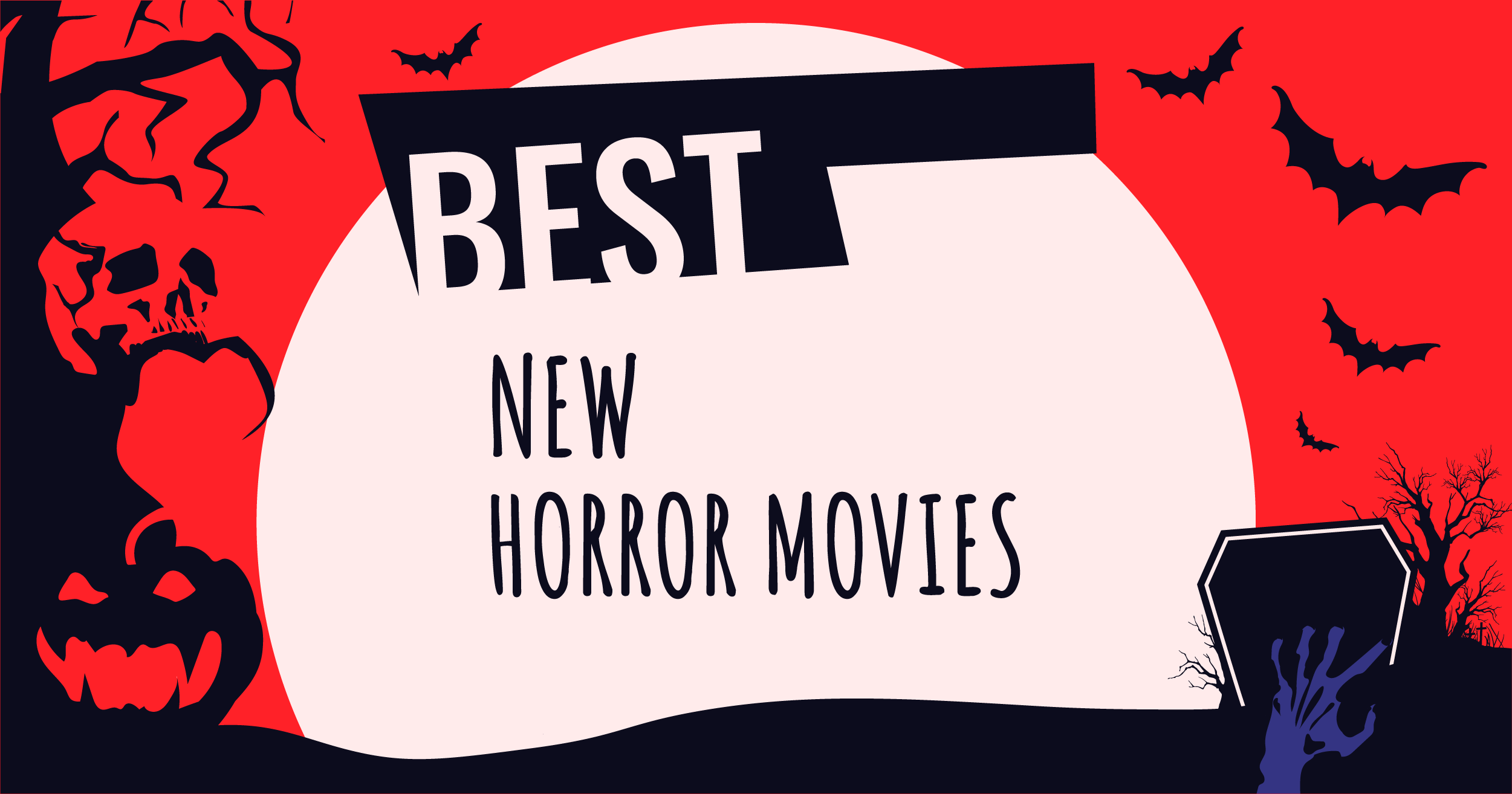 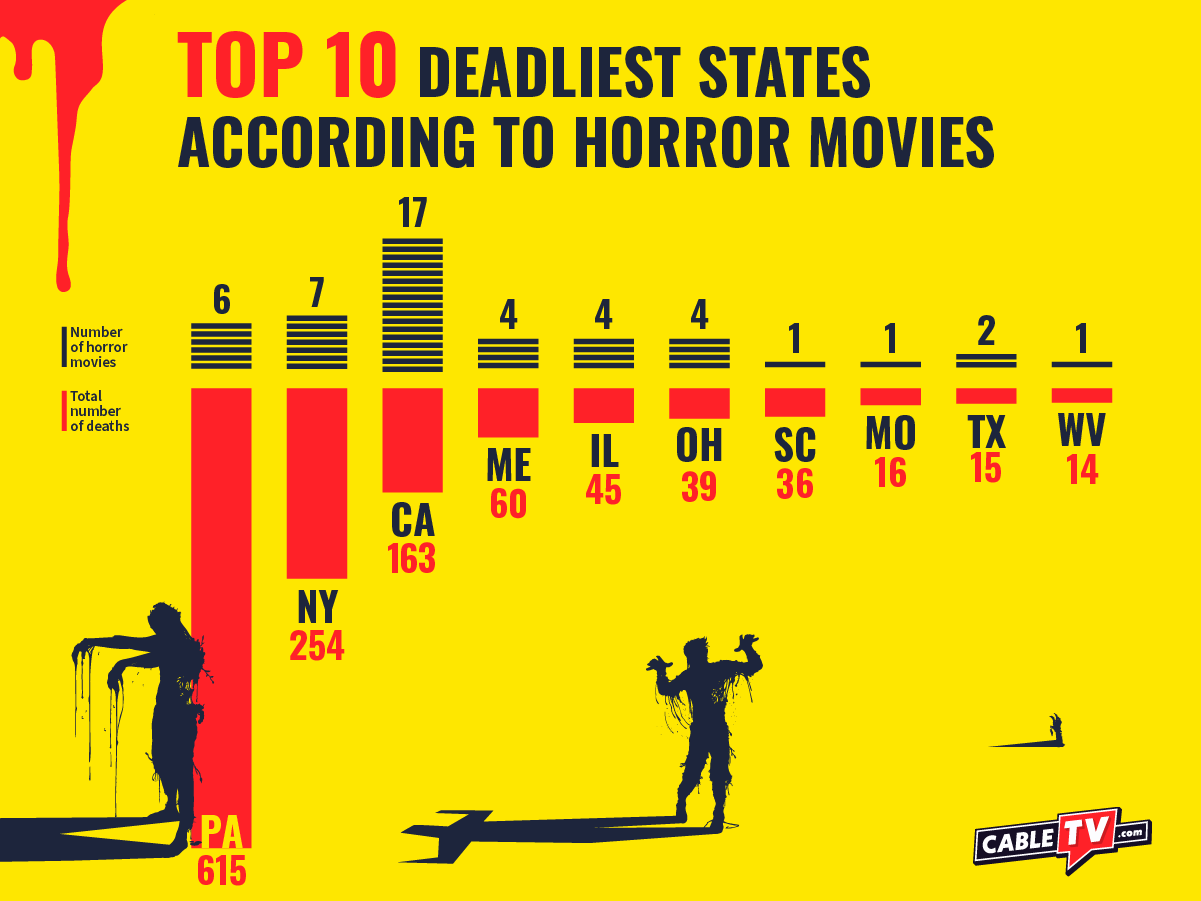 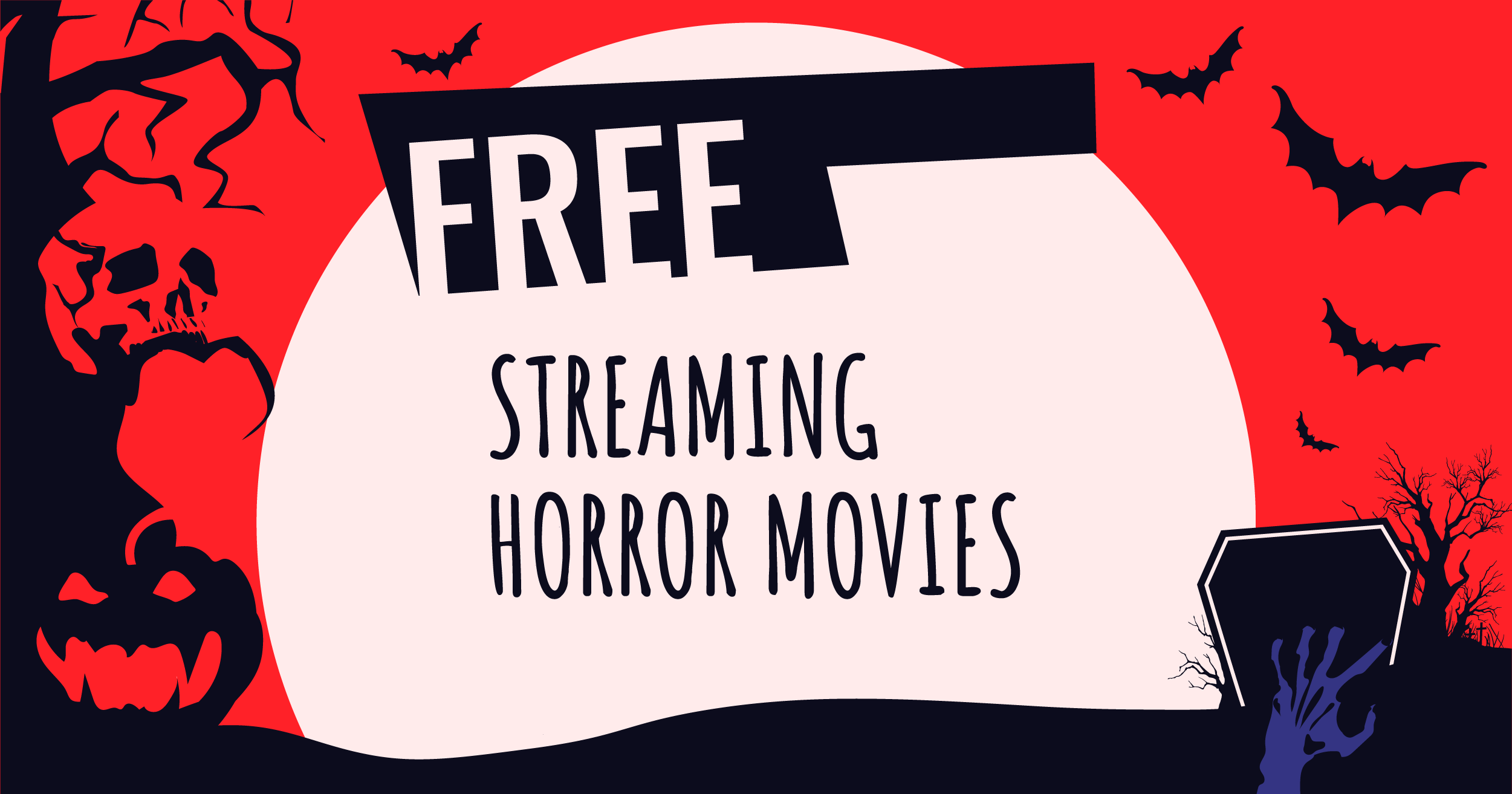 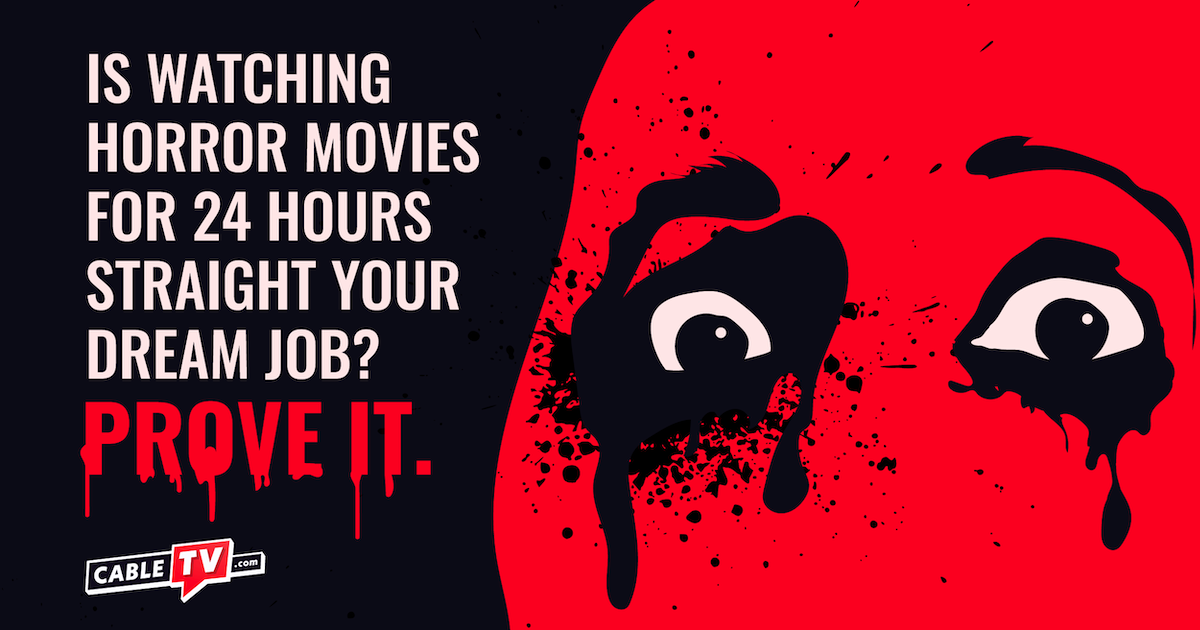