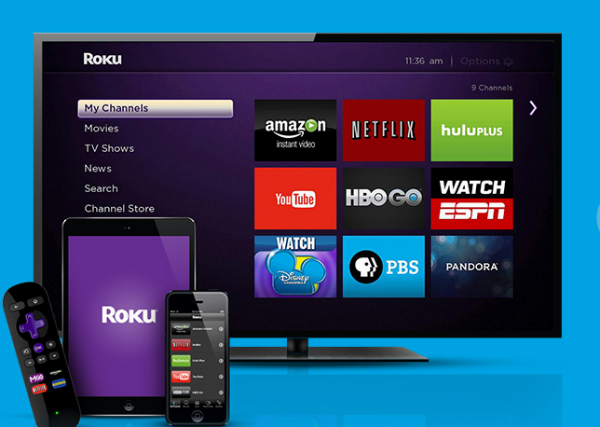 What is Roku? The Roku streaming player is an open source platform available to developers and content providers alike. It offers more than 1,200 channels of entertainment ranging from movies and television shows, a world of professional and amateur sports, outdoors and fitness programs, religious and spirituality offerings, and tons of family and children’s entertainment, including games. The Roku media player leverages your high-speed Internet connection to access thousands of hours of premium, hybrid, and free content and presents it in an easy-to-use format that makes navigation as simple as pressing a couple of buttons and arrow keys. When you add Roku to your cable subscription, you have the world at your fingertips. Open to Everyone The open platform approach makes Roku distinct in the streaming media player marketplace. Its freely-distributed software developer kit (SDK) allows anyone to create their own Roku channel. This has attracted some of the largest content owners and media companies, including Netflix, Amazon, Pandora, NHL GameCenter, Spotify, Crackle, HBO Go, and Hulu Plus. Its real strength since its inception, however, has been its ability to appeal to smaller media companies seeking a larger audience at a fraction of the cost of starting a cable or premium channel. This has given Roku users access to some of the most interesting and unique content available anywhere in the world. How it Works A Roku media player can be purchased from any large box store or online. It is ready to go right out of the box and includes the media player, an AC power adaptor, a remote with batteries, a headphone jack, earphones, and the necessary A/V cables to connect to your television. Each Roku also includes an Ethernet port and a built-in Wi-Fi adaptor, ensuring the easiest and fastest setup possible. Within minutes of unpacking the box, you can be watching your favorite movie, news from around the world, playing ridiculously fun games, and possibly discovering something awesome you didn’t know existed five minutes earlier. Roku doesn’t replace traditional cable and satellite television service, but acts as a supplement with access to more than 1,200 channels of extra content. Roku users will find easy access to on-demand content, pay-per-view sports subscriptions like NHL GameCenter and MLB Extra Innings, and the deepest collection of fresh and never-before-seen programming from innovative creators and developers. How Roku Stacks Up No media player can quite keep up with what a cable subscription offers, but no media player in the industry offers anywhere near the number of channels available on Roku. Apple TV, WD TV, Google TV, and Chromecast are other popular streaming media players in the marketplace and each offers something a little different from Roku. Each offers the ability to tap into the most popular entertainment sources for movies, news, television shows, sports, and weather. Apple TV and Google TV are also available through several other sources like select Blu-ray players and Smart TVs. Roku recently announced a television deal with Hisense and TCL to deploy Roku TV in the fourth quarter of 2014. Both television manufacturers will release a minimum of three Roku TV models ranging from 32 to 55 inches. Roku TV gives consumers the power of Roku without the need for a set top media player. Roku Versions The Roku streaming player comes in four distinct models. Streaming Stick: The latest product from Roku is the Streaming Stick which retails for $49.99. This compact device plugs directly into the HDMI port on your HDTV and includes a remote control, headphone jack and earbuds. It works wirelessly and offers picture resolution as high as 1080p. Roku 1: This entry level media player offers video resolution as high as 1080p HD, wired and wireless Internet connectivity, and works on virtually any television through composite video cables or HDMI. Like the Streaming Stick, the Roku 1 retails for $49.99. Roku 2: This mid-level streaming media box offers a remote with a built-in headphone jack and headphones, offers access to several great games like Angry Birds, uses dual-band wireless for fast, secure connectivity, and works on virtually any television. It retails for $69.99. Roku 3: This is Roku’s high-end streaming media player, which retails for $99.99. It has a CPU that operates more than 5 times faster than the Roku 2, offers a micro SD slot for expanded memory, and operates exclusively on HDTVs through HDMI connectivity. If you’re considering enhancing the current offerings of your traditional cable or satellite TV provider, Roku will serve as a great set top streaming media player. Its sheer volume of entertainment options makes it one of the best values in the streaming media-player marketplace, and its open-source platform ensures continued access to leading-edge content creators. Find Jess on Google+
Prepaid Wireless Internet
Breaking Down Chromecast and How It All Works