YouTube TV may be more expensive, but it's still the best livestreaming TV service out there.

We think YouTube TV is an excellent live TV streaming service—in fact, we’ve named it Cable TV.com’s Best Overall service for 2020. For $64.99 per month, you get 100+ cable and local channels plus an unlimited cloud DVR.

YouTube TV recently upped its price from $49.99 to $64.99 a month, but it also added over a dozen entertainment channels, giving it one of the fattest channel lineups in live TV streaming. It’s more expensive now, but we say YouTube TV is worth it for the features and performance.

YouTube was arguably the original internet streaming TV service, even though it’s never been officially classified as such. Until now.

YouTube TV is the video giant’s first toe into the cable-replacement waters, offering live TV streaming channels in addition to its massive cache of user-generated clips. It might seem odd to get your CNN from the same platform you get your cat videos, but live TV streaming is a natural fit for YouTube.

YouTube TV’s biggest advantage over other streaming TV services is familiarity. It’s close to the same YouTube interface you’ve been using for years but with a few new twists and more popular channels than other live TV streaming services. (It’s still the undisputed leader in cat videos, of course.)

You can get YouTube TV free for a month when you sign up for a Verizon Mobile or 5G Home Internet plan. It’s not much, but it’s more than the usual seven-day free trial.

YouTube TV, depending on your area, offers up to 104 live TV streaming channels, including cable favorites, local channels, and sports networks.

Hulu + Live TV is one of our favorite live TV streaming services at CableTV.com—we’ve named it our Best Value streamer because of its large catalog of Hulu on-demand content and originals. It costs the same as YouTube TV ($6 more if you want the ad-free version on the Hulu side), but you get fewer live channels, less DVR space, and only two simultaneous streams.

In the YouTube TV vs. Hulu + Live TV streaming faceoff, we still think YTTV has the edge.

But watch out, cord-cutters: YouTube TV’s channel lineup is impressive, but it’s missing a few favorites. Networks like Lifetime, A&E, Hallmark, and VICE aren’t on YouTube TV (but you can get them on Philo, another service we like here at CableTV.com).

Combo with Philo: To avoid missing out on your Lifetime stalker movies and Hallmark Christmas flicks, you could pair YouTube TV with Philo. The $20-a-month streaming TV service carries channels that YouTube TV lacks, like A&E, Lifetime, Hallmark, VICE, and a few others.

A challenger to Netflix and Hulu, this isn’t. YouTube’s in-house productions haven’t exactly set the TV world on fire—there’s a steep critical drop-off after Cobra Kai (which YouTube has sold to Netflix). Still, there are some interesting YouTube Originals, like sci-fi thriller Impulse and music doc Coachella: 20 Years in the Desert.

There won’t be many more originals going forward, though: YouTube TV recently bailed on the content creation game, choosing to concentrate on live TV streaming domination.

YouTube TV features as many local channels per region as Hulu + Live TV and far more than other services like Sling TV or fuboTV.

Depending on where you are, you’ll either receive local stations carrying ABC, CBS, FOX, NBC, PBS, The CW, and Telemundo, or a combination of at least four of them.

The CW is the least-available broadcast channel on YouTube TV (and all livestreaming services), but all’s not lost in Riverdale. Any CW series can be called up on-demand in most cases, and The CW also offers its programming for free through its own streaming app. Both work similarly; it just depends on how much app-jumping you want to do.

Get local: YouTube TV features as many local channels per region as Hulu + Live TV and far more than other services like Sling TV or fuboTV.

YouTube TV’s $64.99 a month plan can be fortified with several add-on packages from premium networks, like HBO Max, SHOWTIME and FOX Soccer Plus.

Like most other streaming TV outlets, YouTube TV gives you a seven-day free test drive before kicking into billing mode. Be sure to make a note of the trial’s end date in your personal calendar, whether it’s Google-based or otherwise.

If YouTube TV doesn’t give you everything you want, try pairing it with another streaming service to fill in the blanks—you’ll probably still save money over a cable or satellite subscription.

YouTube TV gives you unlimited—yes, unlimited—cloud DVR space. But not forever; YouTube will dump your saved recordings after nine months. Still, that’s a generous amount of space, and you’ll be able to stream your recorded programming from anywhere on your mobile device.

Fast-forwarding through commercials in recorded shows is quick and intuitive, but there’s no skipping ads with some of YouTube TV’s on-demand programming. Even in the brave new world of streaming TV, you still can’t escape Swiffer spots.

YouTube TV gives you three simultaneous streams across streaming TV devices, computers, tablets, and phones. Conveniently, this counts within the same home network and outside of it, even while traveling throughout the US.

Unfortunately, YouTube TV can’t be accessed internationally—you’ll just have to go enjoy the beach or the museum, instead. Sorry.

A useful feature of YouTube TV is the ability to set up individual Family Sharing profiles. In addition to the original profile (which is set up through a Google account), Family Sharing lets five more people establish their own customizable profiles through their own Google accounts. Viewing preferences, DVR, and watch history are unique, and visible only to each account.

Those five accounts will still have to share just three streams, though. Bummer.

YouTube TV livestreams in 720p at 60 fps (frames per second), the same HD quality as cable/satellite providers and most of the other streaming TV services you’re accustomed to.

Unlike other services, YouTube TV doesn’t currently stream any content in 4K HD or HDR (high dynamic range) quality. Don’t worry; the cat videos we talked about earlier still look as cute as ever.

YouTube TV’s content streams with standard 2.0 stereo audio, but Dolby Digital 5.1 Surround Sound (the audio quality you get with Blu-ray discs) isn’t yet available with the service.

Check your Mbps: With a solid internet connection, YouTube TV streams with little buffering or dropping out. We recommend DSL, cable, or fiber internet rated at 25 Mbps (megabytes per second) or faster.

Here’s a cool YouTube TV customization feature: You can arrange channels however you like. What? Brace yourselves, television traditionalists: YouTube TV, like other live TV streaming services, doesn’t assign numbers to its channels. You can, however, bring order to this anarchy by stacking your preferred channels to the top of the grid for quick access.

YouTube TV also comes with killer search capabilities, thanks to its association with a plucky little startup called Google. You’ve probably heard of it. 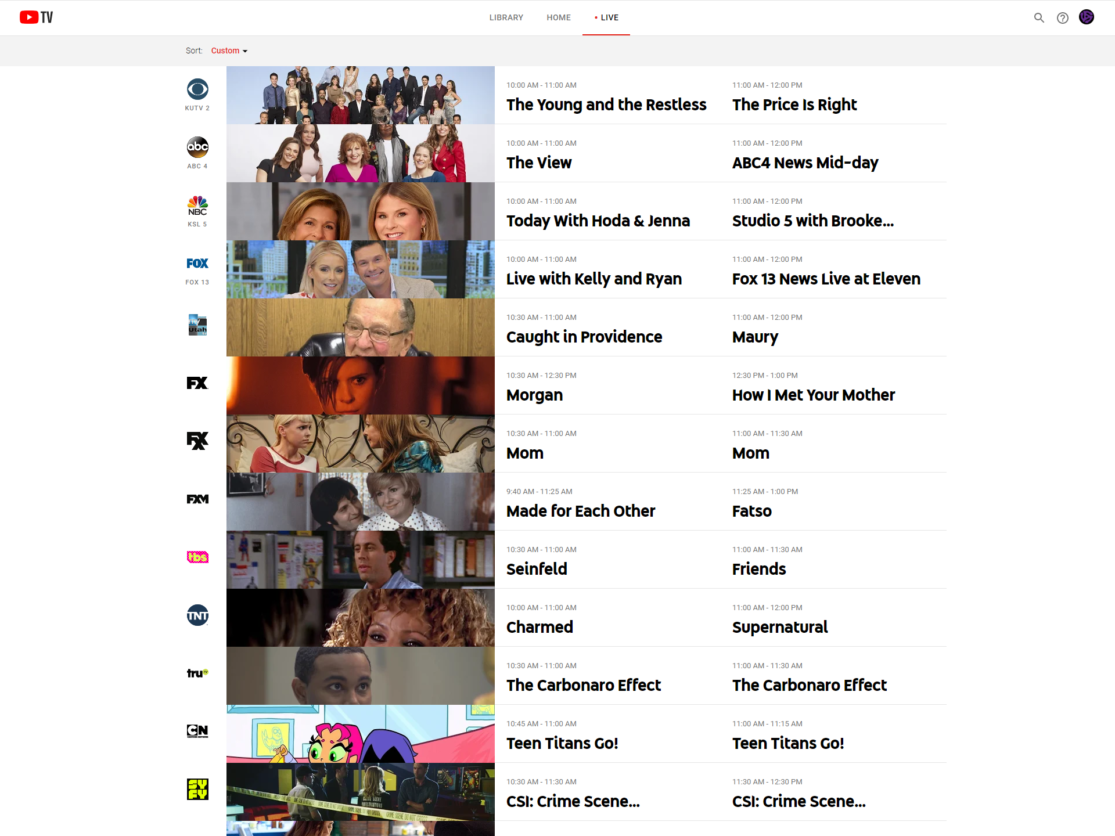 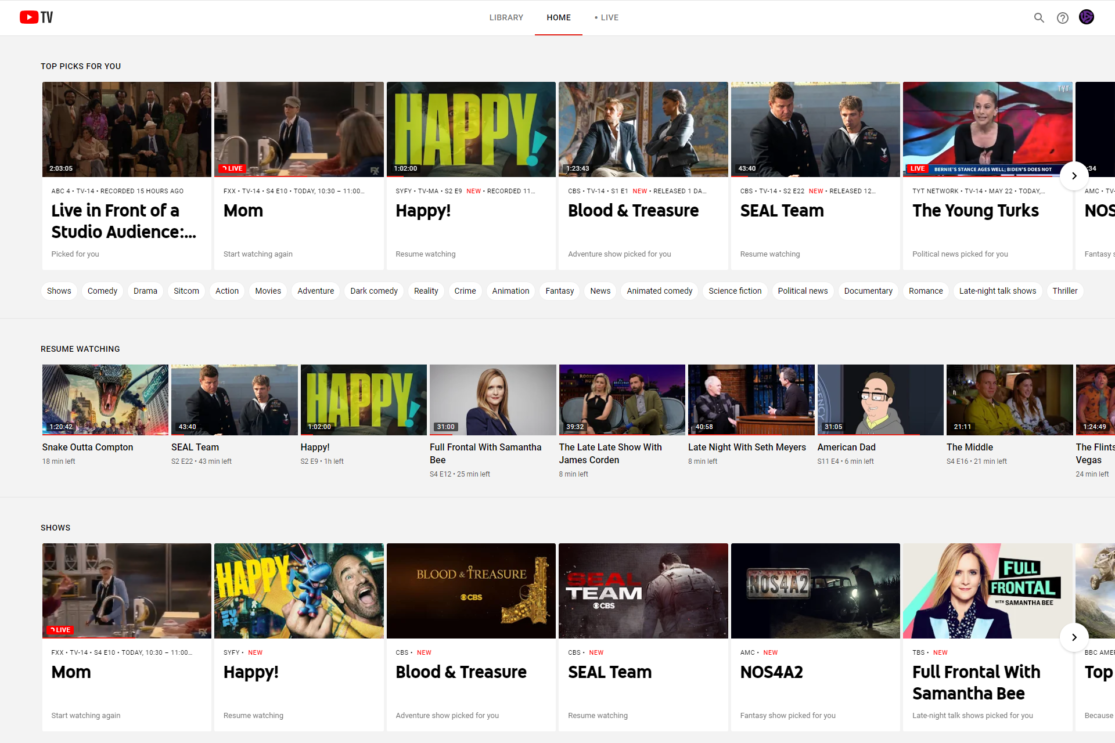 Final take: YouTube TV does TV right, for a price

With only a few shortcomings, YouTube TV is the service to beat in the streaming wars (despite the sting of that price hike). It doesn’t carry a handful of popular live entertainment or sports channels, but the unlimited DVR, customizable features, and smooth performance will do right by first-time cord-cutters.

Plus, you already know how to use it—it may be live TV, but it’s also still YouTube.

YouTube TV costs $64.99 per month. When you consider that you get 100+ cable and local channels with no contract and unlimited cloud DVR storage, it’s still a decent deal compared to cable or satellite TV.

Even though it has a similar interface, it’s different from YouTube because it doesn’t limit your viewing to uploaded videos, and it’s a paid service (100+ live channels for $64.99 per month).

Yes, YouTube TV has PBS, as well as PBS Kids. Before you blow this off, you should know that PBS isn’t currently available on any other livestreaming service. What are you waiting for? Get the Antiques Roadshow on the road.